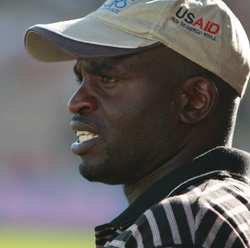 WARRIORS’ assistant coach, Nation Dube who was allegedly paid to leak the list of players to match fixers ahead of the AFCON clash between Zimbabwe and Swaziland was, Friday, dragged to court on charges of bribery.
Dube is accused conniving with former ZIFA CEO, Henrieta Rushwaya, already on remand, as well as former Warriors coach, Ian Gorowa, fired ZIFA board member, Edzai Kasinauyo,  players’ close friend Leeroy Kundishora Waguta who has turned out to be a whistle blower .
Kasinauyo was also released on $100 bail Thursday.
Another accomplice is Chan Sankaran, a well-known Asian match fixer who is alleged to be the financer in this case.
Dube walked free on $100 bail with state’s consent. He was remanded to May 24.
Court heard that in February this year the accused, in one of their routines, agreed to fix AFCON qualifiers match between Swaziland and Zimbabwe which were scheduled for 25 and 28 March in Mbabane and Harare respectively.
They then targeted and agreed to offer bribes to Zimbabwe national soccer team players as an inducement to lose the games.
Court heard they agreed to implement their plan after the announcement of the list of players who were going to play against Swaziland.
As a result, court heard, Kasinauyo was tasked to pressure Calisto Pasuwa, the coach, to prematurely announce the list.
In the event that this did not happen, Dube was supposed to leak the list to the syndicate.
Their target was goal keeper and two defenders, according to prosecutors.
However, Waguta betrayed the syndicate and informed the coach of the plot.
Pasuwa delayed the announcement and later identified Tatenda Mukuruwa as a probable goal keeper.
Court heard that after this Gorowa then phoned Mukuruwa inviting him to South Africa in a bid to lure him into the illicit plot.
Mukuruwa and Waguta informed Pasuwa of the call at once. As all this was happening, Kasinauyo was pressuring the coach to release the list.
As the pressure mounted, court heard, Pasuwa informed ZIFA president Philip Chiyangwa.
On March 10, Jonathan Mashingaidze, then ZIFA CEO, finally made a police report which resulted in the arrest of Rushwaya on Monday.Advertisement