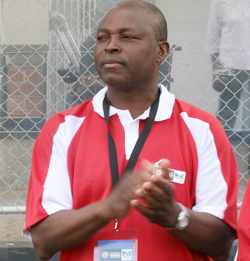 THE Zimbabwe Football Association (ZIFA) has called off an international match featuring the Warriors against neighbours Zambia and a legends match that was set to feature local legends against their South African counterparts.
Dubbed the Christmas Challenge Cup, the tie was slated for the National Sports Stadium on December 23 with the newly appointed Warriors coach Sunday Chidzambwa having already announced the squad for the match.
The legends game was meant to be the main curtain raiser with Rahman Gumbo, David Mandigora and Bekithemba Ndlovu appointed as the coaches.
A statement said, “ZIFA regrets to inform all football stakeholders that the proposed Christmas Challenge cup between the senior teams of Zimbabwe and Zambia has been cancelled due to the non-availability of the National Sports Stadium on 23 December”.
“The match between the legends of South African football and their counterparts from Zimbabwe which was supposed to serve as pre-match entertainment has also been called-off.
“The association was advised that the facility is booked for a wedding on the same date, therefore, the friendly match cannot go ahead,” read a statement from ZIFA spokesperson Xolisani Gwesela.
Earlier on, Gwesela had announced that the football mother body wanted to make the challenge cup an annual event in the country`s football calendar. Advertisement