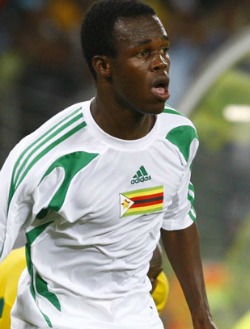 WARRIORS coach Klaus-Dieter Pagels believes they will upset Egypt in their World Cup qualifier in Harare next Sunday.
With Zimbabwe already out of contention for Brazil 2014 as they anchor Group G, Pagels is using the remaining World Cup qualifiers to build a side for the 2015 Afcon.
The Warriors went down 2-1 to Egypt in Alexandria in the reverse fixture which was the German-born gaffer’s first competitive assignment since assuming the coaching reigns last November.
“The game in Alexandria showed us that they can be beaten.  There is nothing special about them,” said Pagels.
“The chances are high for us to win this game. We have to win it so that we create this winning mentality in the squad for the boys to start believing in themselves.
“We respect the fact that Egypt are the log leaders and I do not think they will lose a match in the near future except to us.”
With a squad that only has three European-based players as part of a relatively youthful team, Pagels faces Bob Bradley’s determined Egypt who are bidding for their first appearance at the World Cup since 1990.
Denmark-based midfielder Quincy Antipas has been ruled out with a sheen injury.
The Warriors defence an area of concern for Pagels.
“We had problems in defence in Egypt and that is still the case, but that is something we are working to rectify,” the 63-year-old said.
All hopes appear to be pinned on Germany-based Knowledge Musona whose equaliser in Alexandria was nullified by a late Mohamed Abou-Treika late winning penalty.
“It is a good thing that Knowledge is in good shape and I hope he will continue from where he left from,” Pagels said.
Musona would be complemented by Maritzburg United forward Cuthbert Malajila who has been recalled after last featuring for the Warriors in September last year.
Five points separate Egypt and second-placed Guinea.
After the Egypt assignment, Zimbabwe faces Guinea in Conakry seven days later.
“I know very little about Guinea. I have tried the Internet but unfortunately there is no video material of them,” said Pagels.
Zimbabwe finishes their World Cup qualifiers at home against Mozambique on 6 September.
SQUAD FOR EGYPT & GUINEA
GOALKEEPERS: Washington Arubi(Pretoria University), Maxwell Nyamupangedengu(Harare City), Artwell Mukandi (Dynamos)
DEFENDERS: Lincolin Zvasiya (Kaizer Chiefs), Partson Jaure Dynamos), Ocean Mushure (Dynamos),  Felix Chindungwe (Chicken Inn), Eric Chipeta (Hwange), Hardlife Zvirekwi (CAPS United), Nicholas Guyo (Monomotapa),Advertisement