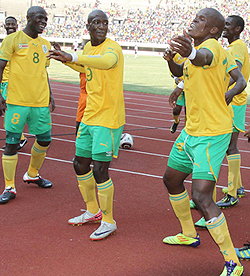 ZIMBABWE dropped one place on the International Federation of Football Associations (FIFA) world and continental rankings released Thursday.
The country’s senior football team, Warriors is now ranked 103rd in the world and 29th in Africa.
Argentina still occupies the number one spot and precedes Brazil and Germany in second and third place respectively.
As far as African rankings go the top ten’s occupants remain the same although there has been some movement with Egypt seizing Tunisia’s third-place spot and Nigeria displacing Burkina Faso as the seventh best team on the continent.
Incidentally, Nigeria’s movement has also been reflected in the world rankings where they have moved into the top 50.
Senegal (33) remain Africa’s best ranked team, trailed by the Ivory Coast (34) whilst South Africa hover just outside the top ten in 11th.
Swaziland, meanwhile, reached its best ever position in the FIFA/Coca-Cola World Ranking (99, up 1). The next FIFA/Coca-Cola World Ranking will be published on 9 February 2017.Advertisement