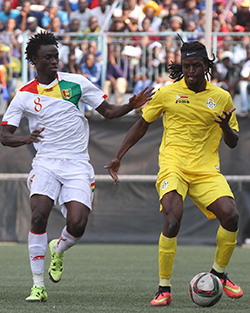 THE high profile African Cup of Nations qualifier between Zimbabwe and Guinea play at Rufaro Stadium on Sunday grossed $88,542 after the soccer mother body sold tickets totalling 25713, according to an income and expenditure statement from Zifa.
Still tie left the cash-strapped Zifa in the red as their expenditure totalled $101,023, resulting in a loss of $12,481.
Most of the money went to pay various service providers including the ZRP for stadium security as well as allowances (camping and appearance fees) for the Warriors.
The latter expenditure gobbled a total of $22,000 while the players’ accommodation chewed $12,500 among other various expenses including the SRC 6% levy for ground rentals.
Zifa however, ended up failing to pay bills at a Harare lodge where the players had been staying.
As a result Warriors coach Kalisto Pasuwa and Czech Republic defender Costa Nhamoinesu were detained on Monday as Zifa battled to raise money to pay the bills.
The association also failed to reimburse Nhamoinesu money for his air ticket after he had used his money to fly in for the match. Zifa had promised to reimburse him after the match banking on proceeds from the gate takings.
The player was however eventually given his money and flew to his base on Tuesday.