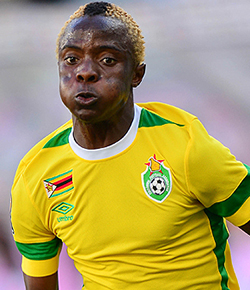 WARRIORS star midfielder Kuda Mahachi was on Wednesday ruled out of Sunday’s African Cup of Nations qualifier against Guinea in Conakry after suffering a fractured arm during training at the National Sports Stadium.
Warriors team doctor Nick Munyonga however, said Mahachi’s injury was not a train smash as he will be out for five weeks.
The lively Golden Arrows midfielder, who has been one of the heroes of the 2017 African Nations qualifying campaign in which the Warriors remain unbeaten, was expected to fly out to his base in South Africa where he would be operated on.
Munyonga said although they could have treated him in Harare, they had been in touch with his club and agreed that it would be best for him to have his rehabilitation at his club.
The Warriors team doctor said Mahachi would be out of action for about five weeks if he was operated on.
“Obviously it’s a serious injury he sustained because he had a fracture of the radius and the ulna bones on the right hand,” said the Warriors doctor.
“And its injury that needs to be operated on for him to recover early and very fast. We expect him to be out for a minimum of five weeks from the time of operation.
“So we had made a number of arrangements to allow him to be operated on with two options for him to be operated here or in South Africa.
“We have been in touch with his club and agreed that probably rehabilitation will be better if it was done in SA. So it’s not a train smash, its only that he will be out for a few weeks otherwise he will be back.”