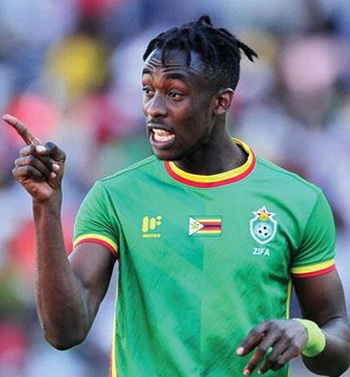 ZIMBABWE international striker Tino Kadewere has taken to social media to apologies to fans after enduring a torrid night during the Warriors’ 1-0 defeat to Liberia in a 2019 Africa Cup of Nations qualifier in Monrovia on Sunday.

The 22-year-old forward who plays for French side Le Havre was guilty of squandering two gilt-edged chances to break the deadlock which eventually proved costly for Warriors as they missed an opportunity to qualify for next year’s continental showpiece with a game to spare.

In an attempt to redeem his actions, Kadewere, who has been the subject of ridicule from angry Zimbabwean fans on social media, issued an apology on his Twitter handle.

“Really not a good day in the office today but we live to fight another day, whatever God has planned is bound to happen.

“I’m really sorry for today but tomorrow is another day. Happy to be back though (it was my first) real major game in three and half months. Will keep fighting #teamzim #godaboveall,” he said.

After surprisingly being named in the starting line-up despite having just returned from a long injury lay-off, Kadewere was clearly rusty throughout but surprisingly, he lasted 81 minutes before he was pulled out for Talent Chawapiwa.

He was at the end of Zimbabwe’s best chance of the first half when he turned a defender before firing over the top, when a simple pass would have presented a teammate with a near tap-in moments before the break.

The former Harare City striker also had a chance to score in the 71st minute but sent his tame shot straight at Liberia goalkeeper Ashley Williams.

The Warriors were made to pay for that missed opportunity as Liberia captain William Jebor scored the only goal of the match a minute later.

Zimbabwe needed a draw to book a place at next year’s finals in Cameroon and will now have to wait until March when they host Congo in their last qualifying match.

The Warriors remain top of Group G with eight points while Liberia moved into the second position with seven.

Neighbours DR Congo and Congo Brazzaville occupy third and fourth spot in the group with six and five points respectively.