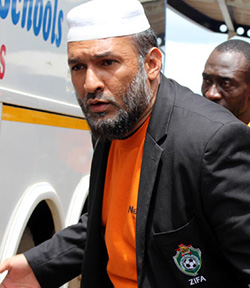 WARRIORS team manager Shariff Mussa has resigned from his post, citing pressing business and family commitments.
The long-serving Warriors team manager wrote to Zifa president Philip Chiyangwa on February 27 announcing his decision to retire from the game.
Below is Mussa’s letter to Chiyangwa:
“I hereby tender my resignation with effect from March 1, 2007 from the post of Zimbabwe senior soccer team manager.
“Over the many years that I have worked with football, I have dedicated my services to the national game and to a football loving nation and I must say that I have enjoyed and endured the highs and lows that come with this sport.
“It is at this juncture that I would want to realign and refocus towards the development of my family and business that had been forced to take a back seat during this ride.
“The attention required to attain my goals for my business and family would leave my duties and responsibility with the current national team set up vulnerable to some extent.
“As the euphoria of 2017 African Cup of Nations where Zimbabwe participated dies down, I am aware the association needs to look to the future and I feel that is time for me to step aside and allow for the process of continuation to be assigned to another person to carry on the button.
“The journey to the 2017 Afcon just like those to the CHAN 2014 and 2016 as well as a number of COSAFA tournaments.

“I wish to thank you sir, in your personal capacity and to thank you and your executive committee for affording me the chance to serve the national team in the role of team manager.
“I may have already been appointed to that post when your leadership came into office but you still found it worthwhile, to repose your confidence in me and entrusted me to carry on and for that I will for ever remain grateful to you sir.
“I have always remained passionate and committed to serving my country through Zifa’s national team and as you may have noted I have occasionally used my personal resources to help in the discharge of national team duties and assist in various spheres.Advertisement

“I have never shied away from serving my country and I am happy to retire having played a part in assisting the national team careers of many great players who are too numerous to mention but who include Peter Ndlovu, the late Adam Ndlovu, George Mbwando, Kaitano Tembo, Benjani Mwaruwari, Esrom Nyandoro through to the likes of Edward Sadomba, Method Mwanjali and lately Khama Billiat, Knowledge Musona, Kuda Mahachi and Willard Katsande.
“I also wish to pay special tribute to all the coaches that I have worked with in the national team some of whom include Sunday Chidzambwa, Rahman Gumbo, Charles Mhlauri, Ian Gorowa, Valinhos, Norman Mapeza and Kalisto Pasuwa who all invited me to be part of their technical departments.
“I also wish to extend the very best of wishes to ZIFA and all stakeholders for the forthcoming and future endeavours.  My thanks go to all the ZIFA officials, the government officials who helped my time with the national team a wonderful journey during which we collectively and individually achieved a lot.
“It has been a huge pleasure and honour to work under the Football Association and the experience I have gained will always be invaluable and I will continue to use it to help our football grow and I want to reiterate Sir that if engaged in future, I will consider where and I what sort of capacity I can help.
“Such a move will also be taken after due consideration of my business commitments as well as family and religious commitments. I do believe that more can be achieved through more focussed and well executed provisions, as long as working for the national team has not been without its challenges but as united family our football has the capacity to overcome most of the challenges.”
Zifa have already parted ways with Pasuwa following the Warriors’ failure to go beyond the group stage at the 2017 African Cup of Nations finals in Gabon.