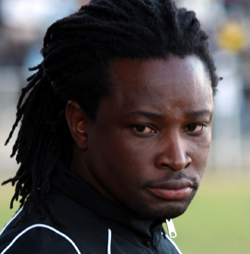 THE Warriors are ready for Sunday’s international friendly match against Mozambique, the coaches said ahead of the game.
The squad has been weakened by the absence of goalkeeper Munyaradzi Diya who left the country for trials at Mpumalanga Black Aces in South Africa while Silas Songani was also still away at Maritzburg United.
The duo of Warren Dube and Nkosana Siwela has also been ruled out due to injuries sustained in the last matches of the Castle Lager Premier Soccer League.
Despite that, assistant coach Mkhuphali Masuku said the boys were responding well to the sessions.
“I think everything is okay, we might not have trained (as much as we would have liked), but the boys are just coming from the league and they are still fit,” said Masuku.
“We still have another day before the match and I am sure we will come up with a competitive team. The match will help us to select the players we need for the finals in South Africa next year,” Masuku said.
The Mozambique friendly will be used by the Warriors gaffer Gorowa as part of preparations for the African Nations Championships that will be hosted in three South African cities from January 11 to February 1 next year.
Zimbabwe will be in Group B with Uganda, Burkina Faso and Morocco with Athlone Stadium in Cape Town as their base.
After the Sunday match, the Warriors are likely to play two more friendlies against Libya and Gabon before going full time into camp.
Warriors squad: George Chigova (Dynamos), Wonder Kapinda (Black Rhinos), Hardlife  Zvirekwi (Caps United), Themba Ndlovu (Buffaloes), Gerald Ndlovu (Hwange), Felix Chindungwe (Chicken Inn), Milton Ncube (Highlanders), Nqobizitha Khumalo (Bantu Rovers), Convenience Hungwe (Black Mambas), Danny Phiri (Chicken Inn), Pasca Manhanga (Triangle), Silas Songani (Harare City), Lot Chiwunga (Black Rhinos), Kuda Mahachi (Chicken Inn), Ali Sadiki (FC Platinum), Bruce Kangwa (Highlanders), Misheck Mburayi (Triangle), Simba Sithole (Dynamos), Simba Sithole (How Mine)Advertisement