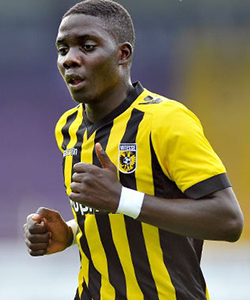 WARRIORS midfielder Marvellous Nakamba is angling to sign for Belgian top-flight league side Club Brugge.
The Zimbabwean international midfielder was spotted at South Africa’s OR Tambo International Airport on Sunday travelling to Belgium for contract talks.
Nakamba, who plays for Netherlands’ top-flight league side Vitesse has been the subject of interest from several European clubs but it’s likely he would sign for the Belgian club.
“I am travelling to Belgium for contract talks with Club Brugge. I can’t say much about it for now until the talks have been finalised.
“But I would love to play for them, they will be playing in the Champions League,” said Nakamba.
Club Brugge-were beaten to the championship by rivals Anderecht but will still be playing in the UEFA Champions League.
Nakamba was part of the Warriors squad that qualified for the 2017 African Cup of Nations finals held in Gabon January under Kalisto Pasuwa.
He also played a part as the Warriors, under the guidance of care-taker coach Norman Mapeza, beat Liberia 3-0 in the 2019 African Cup of Nations qualifier at the National Sports Stadium recently.Advertisement