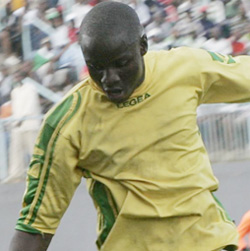 NYASHA MUSHEKWI survived a potentially leg breaking tackle and scored a brace to help his side Dalian Yifan to a 2-1 victory over Shenzhen FC and claim a place at the summit of the league table- a quarter of the way through the season.
According to reports from China, the match against Shenzhen FC will be remembered as the Nyasha Mushekwi show.
The big Zimbabwean hit man, scored two powerful headers, survived a potentially leg breaking tackle and missed a penalty as his side emerged winners to shoot to the top of the table.
With Qingdao Huanghai and Beijing Renhe playing out a controversial 0-0 draw 24 hours before, both sides knew that victory in this Sunday afternoon clash would send them top of the table, but it became clear within four minutes whose day it was going to be as Mushekwi out-jumped and out-muscled Cui Min to head in a Shan Pengfei cross.
Cui is among the most physically imposing domestic centre backs in all of China and he could do little to prevent Mushekwi heading past poorly positioned goalkeeper Guan Zhen.
It soon became clear that one of Shenzhen’s primary tactics was to rough up Dalian’s star striker as much as possible, but things really got out of hand in the 62ndminute when centre-back Wang Dalong launched a sickening studs-up, airborne lunge towards the prone leg of Mushekwi in order to prevent a counter-attack.
It is possible that Wang was tentatively going for the ball, but he was so late and his challenge so reckless that it came as a shock to everybody when the card referee Tang Shunqi produced was only a yellow one.
Replays showed Mushekwi’s leg bending at a horrifying angle, but he was soon back on his feet and had powered home a second header from a Cui Ming’an free kick within just three minutes of it looking like his season might be over.
Mushekwi celebrated by immediately breaking out into a limp and asking to be subbed off, but Yifang manager Juan Ramon Lopez Caro was having none of it and kept his biggest asset on the field to continue terrorizing Shenzhen’s defence.
There was still time for more refereeing controversy in the last ten minutes as Tang gave Harold Preciado the chance to score his fourth penalty of the season when a ball brushed Shan Pengfei’s naturally positioned arm amidst an aerial challenge.Advertisement

And he returned the favour to Yifang a few minutes later when Aboubakar Oumarou mis-kicked the ball into his own arm. Guan Zhen was on hand to deny Mushekwi the chance to complete his deserved hat-trick from the penalty spot, though.