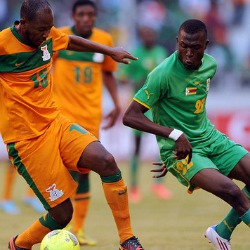 Zambia 2-0 Zimbabwe
Early and late goals from free-kicks gave Zambia the Cosafa Cup Saturday with a 2-0 win over holders Zimbabwe.
Alex N’gonga scored after four minutes and substitute Kabaso Chongo sealed success two minutes into stoppage time in the Zambian mining city of Ndola.
But the score-line was cruel to Zimbabwe, who won far more possession only to be foiled by some great goalkeeping from Danny Munyau and their own poor finishing.
It was the fourth southern African national team championship title for Zambia, matching Zimbabwe’s record. And France-born Zambia coach Herve Renard got the revenge he craved for 2005 and 2009 final defeats by Zimbabwe.
It was his second trophy in charge of the Chipolopolo (Copper Bullets), having defied the odds to win the 2012 CAF Africa Cup of Nations in Gabon.
N’gonga, elevated to the starting line-up after making a big impact when he came on against South Africa in the semi-finals, struck on four minutes.
The position of the free-kick – 25 metres out near the touchline – hardly spelt danger to Zimbabwe. But as the kick flew goal-wards, the defensive wall pushed forward and the ball bounced once before flying over Maxwell Nyamupangedengu into the corner.
A wonderful start for the hosts almost got even better on the quarter-hour mark when a Bornwell Mwape back-header rebounded off the crossbar.
Zimbabwe slowed gained the ascendancy and a purple patch midway through the opening half came close to delivering an equaliser.
Tendai Ndoro headed wide from close range, Munyau acrobatically tipped away a Last Chibwiro drive, and an Eric Chipeta header off a corner flew just over.
There were more substitutions than scoring chances in a second half Zimbabwe often controlled, and Munyau did superbly to keep out a Ronald Chitiyo header.
Zambia substitute Moses Phiri went close with a shot across the goalmouth before Chongo landed the killer blow. His goal was a carbon copy of the first as he glided the ball across the face of the goal and into the far corner.
Renard however admitted on Sunday that the hosts were lucky to win the final noting that had Zimbabwe matched superb build-up play with more clinical finishing, the Warriors could have claimed a record-extending fifth title.Advertisement

“We did not play well, but the most important thing in a final is to win and that is what we did,” France-born Renard told reporters.
“There were not enough ‘fresh legs’ in the Zambian team and we were lucky to survive and collect the trophy.
“I would like to congratulate Zimbabwe – they looked the better team in the decider even though we won it.”
Renard said the midweek penalty shootout semi-final victory over South Africa after 120 gruelling, goalless minutes took a heavy toll.
“We fought very hard against South Africa to win on penalties and you could see the impact it had on us in the final.
“Zambia can play much better than they did against Zimbabwe, but the most important thing in football is the result.”