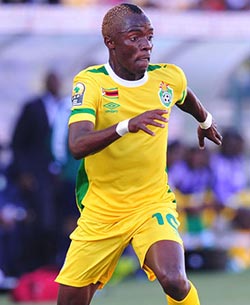 WARRIORS winger Kudakwashe Mahachi who also plays for South Africa’s Golden Arows has been dealt a heavy blow following the untimely death of his daughter on Tuesday.
The player broke the devastating news of his loss on social media, taking to his Instagram page to share a tribute to her.
“Rest in peace my angel. I will always love you my Deneo,” Mahachi wrote.
Mahachi’s national teammate, who plays for Kaizer Chiefs, Williard Katsande also conveyed his heartfelt condolences to his Warriors teammate and family for their loss.
“You just need to be strong. Sorry for your loss, my condolences to you Kudakwashe Mahachi and your family during this difficult times. Am sure she’s in safer place now,” Katsande said on his social media post.

The 22-year-old is set to miss their Absa Premiership clash against Jomo Cosmos later tonight as he mourns his loss.