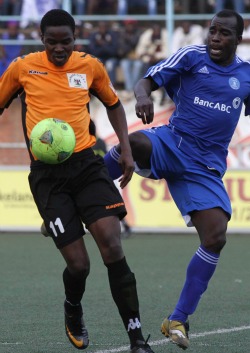 Dynamos 0-0 Harare City
DEFENDING champions Dynamos dropped points in a goalless draw Wednesday against Harare City, a side they have struggled to beat since its promotion to the premiership last year.
Last season City beat Dynamos by 1-0 before losing the reverse fixture by the same margin.
In Wednesday’s encounter at Rufaro, Bigboy Mawiwi’s charges again refused to be cowed by their more fancied rivals and battled hard to force a share of the spoils.
The champions could have put the game to bed in the first half but their strikers contrived to miss a host of chances for which they could have paid dearly had City’s goal just before the break not been disallowed.
Dynamos could have taken the lead as early as the third minute but Tawanda Muparati shot tamely at goal after being fed by Thomas Magorimbo.
A few minutes later, Clive Kawinga, who is still to score for Dynamos, after joining from  cross-city rivals, CAPS United, fluffed his chance with the acres of space in front of the City goal.
Muparati was also to watch in disbelief just before the break when his header off a cross from Washington Pakamisa was saved by City stopper Maxwell Nyamupangedengu.
Encouraged by their opponents’ wastefulness, City fought back and thought they had taken the lead with an Osborne Mukuradare strike just before the break which was however ruled off-side by referee Ruzive Ruzive.
City continued to apply pressure in the second half with Phineas Banusi, brought on for Trymore Nyamadzawo, giving Dynamos a lot to think about in midfield.
Clearly concerned, Pasuwa took off Kawinga for Ugandan striker Boban Ziruntusa who blasted over the bar with a long range effort in the 63rd minute.
End-to-end exchanges continued as both sides looked for the opener but Dynamos suffered a scare in the 83rd minute when Patson Jaure was forced to spend several minutes on the side-lines after a nasty tackle by City forward Bamusi.
Pasuwa – who had exhausted his substitutions – was a relieved man when Jaure managed to return to the field of player and finish the game.
The Dynamos coach was frustrated that his side had failed to make use of the many chances they created.
“We couldn’t score,” Pasuwa lamented after the game.
“The problem was caused by the substitution after the injury on Bello when Magorimbo was in control of the midfield. Kawinga got injured as well and we badly wanted those three points but it was unfortunate. l am happy with the draw because of the situation.Advertisement

“Bello’s ankle immediately got swollen five minutes after he was injured and Jaure had a crack on the shin according to the medical team, but l don’t know about Clive’s injury as yet.
“We have so many injuries and we have to assess our squad and see who is fit for the weekend match against Motor Action.”
Mawiwi said his side’s goal should have been allowed to stand but felt a share of the spoils was still a fair result.
“I think we played well despite the fact that we started slowly and only started playing our normal game after 20 minutes. And l also think that goal we scored, was a clear goal,” he said.
“We should have got our chances but it wasn’t our day. Dynamos were also attacking and this is a fair result.”
Elsewhere, FC Platinum were beaten 0-1 at home to visiting Hwange.
Hwange coach Nation Dube said the three points were deserved.
“It (the win) was long overdue,” he said.
“We did not go out to buy big names but we kept faith in our youngsters and the fruits are now ripe. Our plan was just to hit them on the break and we basically did that and our victory was long overdue.”