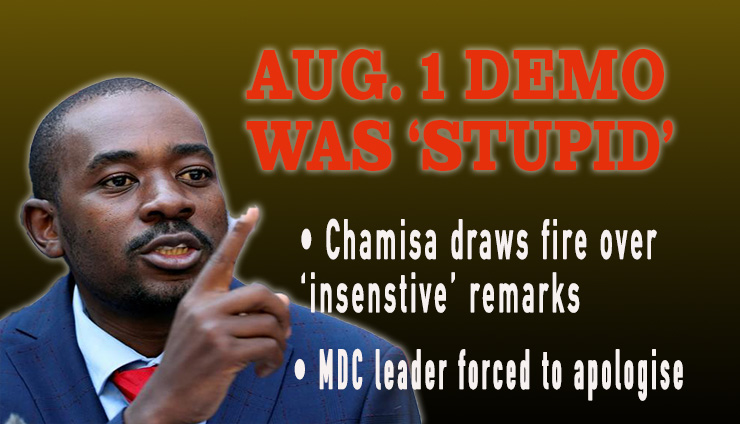 MDC leader Nelson Chamisa has described as stupid, protests by hordes of suspected party supporters who took to the streets August 1 to demand the announcement of all the results of the July 30 election with fears of rigging by the Zimbabwe Electoral Commission on Zanu PF’s behalf.

Chamisa said this at a press briefing in Harare Thursday, where he also revealed he has also been summoned to appear before the ongoing Commission of Inquiry into the shock disturbances.

Six unarmed civilians shot were dead by what has widely been believed to be soldiers who were deployed to quell the wild protests. Security chiefs have denied any of their officers opened fire on civilians.

During the period leading up to the disputed poll, Chamisa and his MDC lieutenants repeatedly urged party followers to “defend” their vote, with some saying supporters should not leave polling stations before they were satisfied that their vote was not manipulated.

Chamisa has since come under fire from both the country’s security organs and opponents for allegedly inciting the violence that ensued on the fateful day.

However, in what could be construed as an attempt to distance himself from the August 1 disturbances, Chamisa has since questioned the wisdom of embarking in protests before people could know about all the results.

He said he had been confident of victory and passage to state house in the election and would not have, in his wisdom, incited people to go and burn cars of a country he was ready to rule.

“It was very stupid even for people who demonstrated, to demonstrate for the results to be released. It was stupid because they then opened themselves to attacks and manipulation,” Chamisa said.

“It is their right but I feel that it was not called for and that is my view.

“I am not insulting them but I have a right like any other (person) because it was premature, not strategic and open to be manipulated by the enemies of the people and the enemies of peace, the merchants of violence, the archbishops of violence.”

Hours after Chamisa’s snide remarks towards people who were fighting his cause, social media has been abuzz with the opposition leader’s criticism for alleged failure to exercise empathy for those who were killed.

The opposition leader’s words however received support from an unlikely source in Linda Masarira, spokesperson for the Thokozani Khupe led MDC.