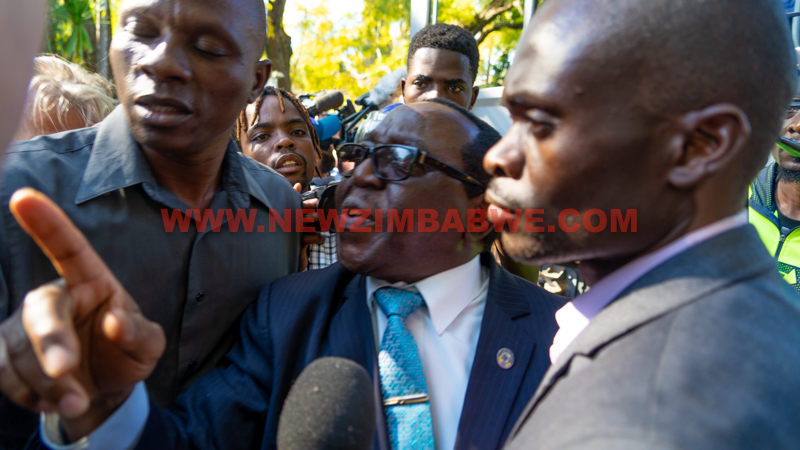 Dozens of local and international journalists were waiting to be addressed by MDC Alliance leader Nelson Chamisa at the garden hotel when riot cops swept into the hotel gardens and ordered them to leave without explain why.

The reporters refused to budge resulting in a standoff lasting minutes before the cops retreated to the gates of the hotel presumably to stop Chamisa entering the facility.

Khaya Moyo, who is also the Zanu PF national spokesman then arrived and ordered the police to leave.

“The press conference will go on. There is no government as of now. I’m speaking on behalf of Zanu PF,” he could be heard shouting as he was mobbed by the press, opposition supporters and members of the public who rushed to the scene to catch a glimpse of spectacle.

The minister was initially ignored before the police later got into their trucks and left.

The ZRP later issued a statement saying the incident was regrettable adding that the intention was not to cause unrest.

“Given the prevailing security situation and events that unfolded on the 1st of August 2018 and intelligence at hand the police responded purely on basis of tenets governing meetings and gatherings according to country laws,” read the police statement.

President Emmerson Mnangagwa also used Twitter to say that what happened was uncalled for.

“This (press freedom) is an indispensable part of the new Zimbabwe. It is non-negotiable and will not change. We won the election freely and fairly and have nothing to hide or fear.

He added; “Anyone is free to address the media at any time.

“The scenes today at the Bronte Hotel have no place in our society and we are urgently investigating the matter to understand what happened.”