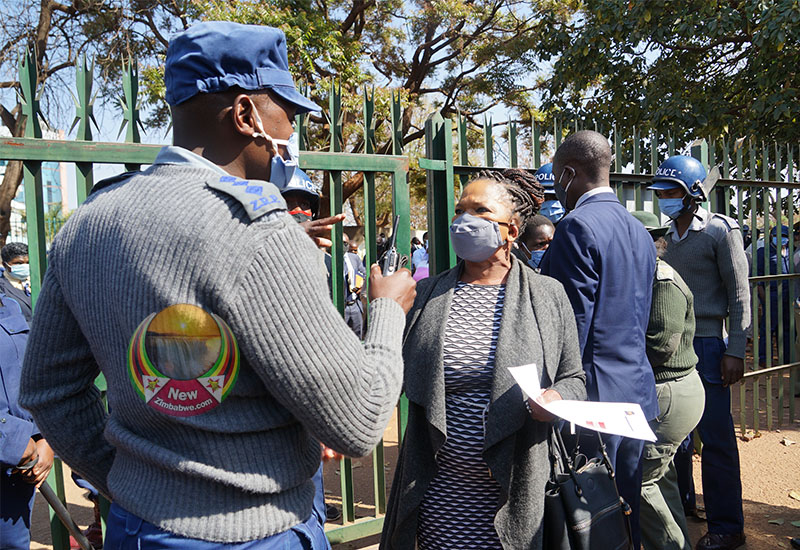 The senior police officer is heard shouting; ‘Futseki’ to Mtetwa before claiming she was a bogus lawyer.

“This place is controlled by the police, we are here now, what will you do about it? What do you want to do about it?  Futseki,” shouted the chief inspector who is joined by his subordinates manning the main entrance to the court building to harass Mtetwa.

Investigations by NewZimbabwe.com showed the police officers had been directed to bar Mtetwa from entering the courts.

However, Mtetwa stood her ground and told the police officers they had no right to bar her from entering the courts.

“I am entitled to get in here as a lawyer. So, the courts are now controlled by the police? So, this is a police state? I have an ID and I come here every day; this ID is not for you but the Judicial Services Commission (JSC).

“You people think you are the law, I am entitled to assert my rights, why are you denying me my right, this is now a police state.”

She was eventually allowed into the courtyard by a JSC official.

In a statement, the Zimbabwe Lawyers for Human Rights (ZLHR) said it was concerned by Mtetwa’s continued persecution.

“We are greatly concerned that our member lawyer Beatrice Mtetwa continues to be persecuted for seeking to discharge her professional duties as a legal practitioner,” it said.