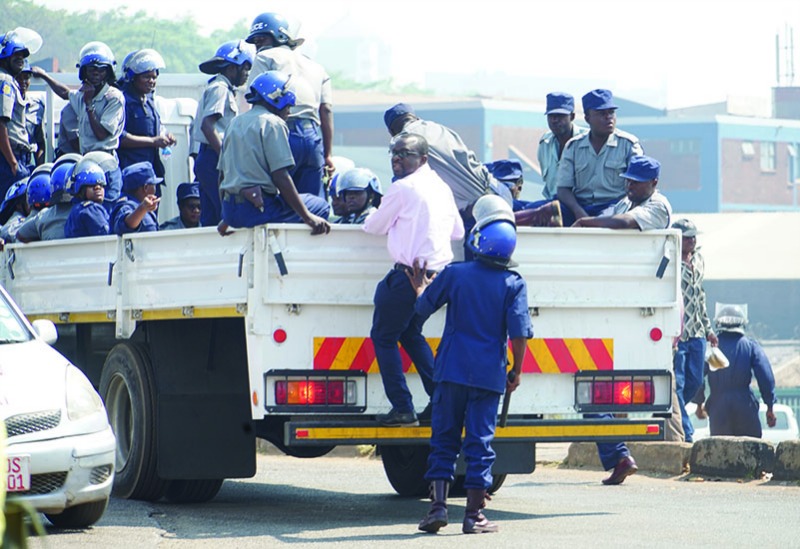 POLICE on Wednesday  briefly detained NewZimbabwe.com editor Gilbert Nyambabvu as he filmed them engaged in running battles with some vendors in Harare.

The incident happened Wednesday morning at the Simon Mazorodze flyover on the outskirts of the capital as Nyambabvu and other journalists were driving to Glen View to cover President Emmerson Mnangagwa’s tour of the cholera-hit area.

The riot police appeared to be clearing vendors and their wares from the route Mnangagwa would use on his way to Glen View and the Beatrice Infectious Diseases Hospital.

Nyambabvu, who was accompanied by four NewZimbabwe.com reporters as well as freelance journalist Violet Gonda, was ordered onto a police truck where he was briefly questioned.

“I was accosted and told to get onto a police truck full of baying riot cops despite telling them I am a journalist and showing them my press card,” Nyambabvu explained.

“There is no need for the police to harass journalists going about their legitimate duties, and such duties include filming them as they throw stones at vendors.

“This sort of conduct makes a mockery of the so-called New Dispensation. A village scarecrow suddenly adorned with a new wig is still a scarecrow.”

Police were apparently infuriated by the journalists’ use of smartphones to film them as they threw back stones at some defiant vendors.

Added Nyambabvu; “You want to be outraged about the needless harassment but when police say – you can’t be a journalist because you’re filming with a smartphone – you just laugh.

“You realise that these are, actually, colleague citizens in need of help because the world has advanced in ways they can’t understand.”

WATCH: Police detain Editor and harass other journalists for filming them as they throw stones at vendors in Harare. Full story @NewZimbabweCom, @violetgonda pic.twitter.com/uTEjhCXCjG

NewZimbabwe.com senior journalist Anna Chibamu said police also demanded some cameras which the crew had been using to film the skirmishes.

“One police officer came to me and demanded to see my press card which I showed him,” Chibamu said.

“He then demanded cameras but we refused insisting this was unlawful as we were doing our lawful duties.”

Photo-journalist Idah Mhetu said police also demanded that she deletes images she had taken of the fracas but she stood her ground and refused.

During the skirmishes, police were seen confiscating some of the items which were being sold.

Other vendors tried to fight back using stones and, in scenes never seen before, police returned fire using the same stones.

As the police realised that the journalists were live-streaming the skirmishes , they got into their trucks and drove away.

The harassment of NewZimbabwe.com journalists comes amid continued reports of local media personnel being harassed for doing their lawful duties.