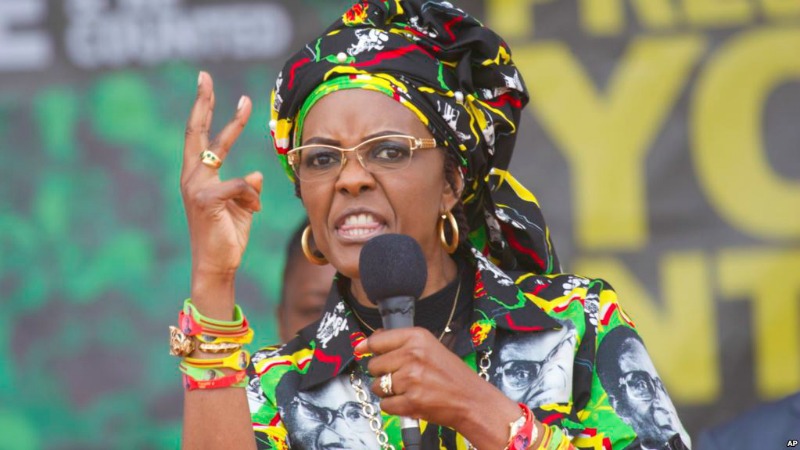 From James Muonwa in Zvimba

FORMER First Lady, Grace Mugabe has been fined five cattle and two goats for violating traditional customs and rites following the burial of her husband, the late ex-president Robert Mugabe at the family rural home’s courtyard.

Grace was summoned to appear before Chief Zvimba’s traditional court Thursday at Gonzo Guzha Hall at Murombedzi growth point in Zvimba but snubbed the hearing.

Mugabe died in September 2019 and was buried at Kutama, his rural home despite vigorous attempts by President Emmerson Mnangagwa’s administration to have him interred at the National Heroes Acres in Harare where a lot of other nationalists are buried.

Grace, who according to media reports is in Singapore, was also facing charges of disregarding earlier counsel to lay to rest the late former president at a designated site where his late mother had identified prior to her passing.

The hostile security details chased away journalists saying they were working on instructions from “higher authority” to bar anyone not authorised by Paramount Chief Zvimba, born Stanley Urayayi Mhondoro from attending the court hearing.

Journalists were ordered to stay 100 metres away from the venue.

Although the start of the hearing was scheduled for 9:30 am, proceedings only commenced at around 11 am as the local chiefs’ council allowed Grace time to pitch up, which never happened.

Sources who spoke to NewZimbabwe.com said only 15 people, including four chiefs, were allowed into the court.

The court sat until around 3 pm before the traditional leaders emerged from the derelict hall, hopped into their top-of-the-range vehicles before driving off under police guard.

Chief Zvimba, despite numerous denials of his involvement in the matter, reportedly chaired the indaba where it was unanimously agreed Grace should be fined five heifers and two goats.

Chief Zvimba was last to come out of the hall, with a group of journalists door-stepping him in the midst of spirited attempts by police officers to bar them from interviewing the traditional leader.

However, the chief got into his latest chauffeur-driven Isuzu double twin-cab before driving off without entertaining any questions from the media.

Earlier, Dominic Matibiri, a relative of the Mugabes was also barred by police from joining proceedings.

NewZimbabwe.com later caught up with Matibiri who rubbished the court sitting, arguing Chief Zvimba had an ulterior motive.

Matibiri said Chief Zvimba was part of the chiefs’ panel that decided on the late former president’s final resting place and should also be fined if the custom was to be followed to the letter and spirit.

He added the whole drama surrounding the push to exhume Mugabe’s remains for reburial had brought shame to the Zvimba chieftainship.

“When the court rules that Grace should pay cattle, we wonder from whose kraal they will take these beasts. By summoning her, the chief belittled us as surviving men from our clan who are supposed to answer to such allegations,” said Matibiri.

“He is now doing as he pleases, but what he has done is exposing the chieftainship to ridicule. We as the Mugabe family hold claim to the Chidziva chieftainship. We are royalty as was Mugabe.”

Suggestions to exhume Mugabe’s remains for reburial were shocking, he said.

The visibly irate Matibiri said it pained him that Chief Zvimba was orchestrating the reburial of Mugabe’s remains, and it was “a great betrayal to the spirit of a person who installed him as a traditional leader.”

Efforts to get a comment from Chief Zvimba over the phone also proved futile as he repeatedly terminated the calls.

The plaintiff in the matter, Tinos Manongovere, who is a cousin to the late former president, declined to comment when contacted by NewZimbabwe.com for comment after the hearing.