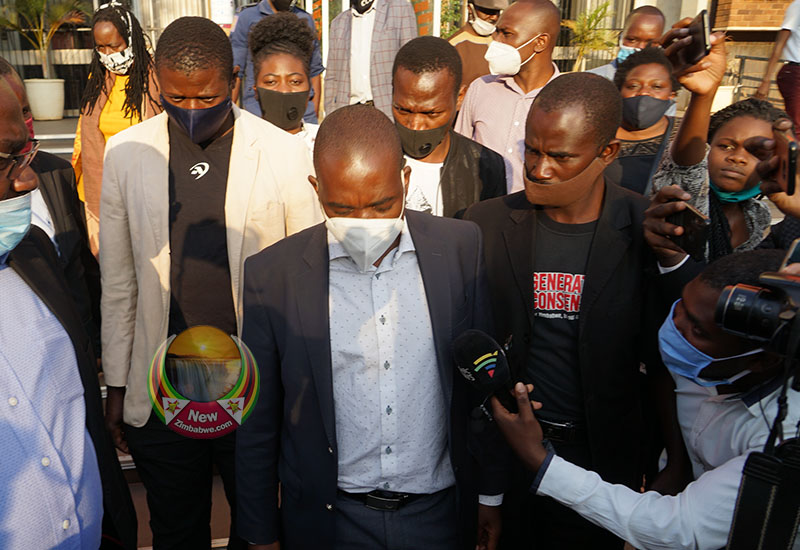 On Wednesday, he was remanded in custody after his application for refusal of remand was rejected.

After the court hearing, journalists sought comment from Chamisa, but anti-riot police officers tried unsuccessfully to stop the impromptu media briefing outside the court building.

The opposition leader described police attempts as evidence that Zimbabwean citizens are under siege.

“What we are witnessing is an escalation of a deteriorating situation in the country.  The human rights abuses are unbelievable, the draconian attitude of the state is unbelievable. The fact that we actually have police having difficulty in just having a normal interview tells you we are in a situation that is untenable,” Chamisa said.

Turning to Sikhala’s charges, Chamisa said; “It is incredible that you have someone being denied bail simply for the reason that they have uttered a particular statement. It cannot be normal. An allegation is not a conviction. We expect them to be granted bail so that they can have their day in court to defend themselves.

“Globally, it is evident that we have a difficult situation in Zimbabwe and this is why we are saying things in Zimbabwe are not normal. Zimbabweans are under siege, the human rights situation is deteriorating, the political situation is a case of a crisis.

“You cannot say that it is not a crisis when we have senior leaders of the opposition, journalists, lawyers being terrorised, being intimidated.”

Chamisa added: “It will only end when we have resolved the political crisis in this country and this is why we are saying there has to be a political settlement.

Chamisa told journalists the crisis in Zimbabwe was now beyond only one political party.

“We need all Zimbabweans to unite, churches civil society, trade unions, political parties to come together and be of one mind. We demand accountability, we demand democracy because that is what the liberation struggle was all about.

“This kind of apartheid mindset, the kind of a crocodile state that is only there to be predatory cannot be allowed and cannot continue.”

Chamisa was accompanied to the courts by MDC Alliance secretary-general Charlton Hwende and several party activists.