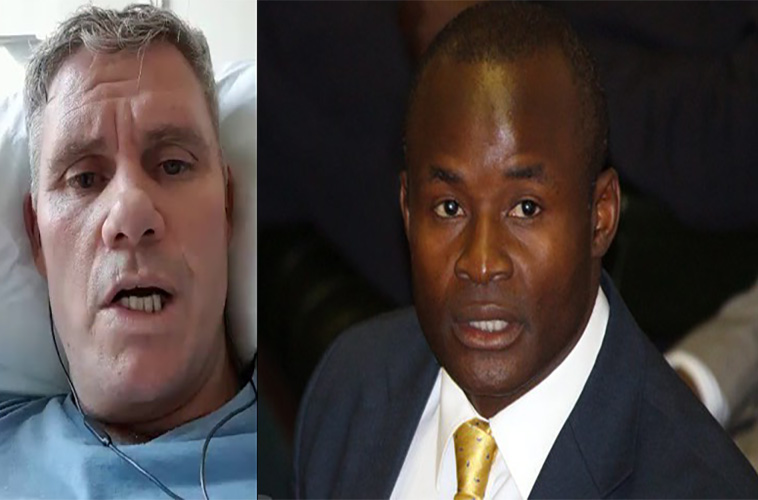 CANCER fighting British investor Paul Westwood, who claims his companies were “illegally” grabbed by Norton legislator Temba Mliswa in 2009, has again appealed for justice and compensation for the loss of his $1.4m business.

Seizure of the companies – Noshio Motors and Benbar – occurred at a time Mliswa was still a member of the ruling Zanu PF party and its provincial chairperson for Mashonaland West.

The married father of two boys says the once flourishing companies – reportedly worth one million British pounds at the time – were “destroyed overnight” under Mliswa’s charge.

Westwood’s appeals for assistance to then president Robert Mugabe were ignored, apparently because the Norton MP enjoyed the protection of powerful uncle and cabinet minister Didymus Mutasa.

Mliswa, who now ironically crusades against corruption, has long denied the allegations.

In a video on released Sunday, Westwood pleaded with Mugabe’s successor Emmerson Mnangagwa to intervene and “show the world that (Zimbabwe) is ‘Open for Business’”.

Now battling cancer, Westwood explained; “I am lying in a hospital bed in Scotland.

“What happened to me was wrong. Mliswa took advantage of the Indigenization Law to grab my company.

“I would like the world to know that eight years down the line, I am still waiting for justice; real proper justice and compensation from him.

“What did I do (wrong)? I humbly appeal to the President Emmerson Mnangagwa to make sure the law is applied.

“I have cancer due to anxiety due to the treatment I got from Temba Mliswa.”

“I humbly ask the Zimbabwean authorities government why Temba Mliswa has been allowed to get away with what he got away with me.

“He illegally seized my company in December 18, 2009. I gave the courts overwhelming evidence to prove my case, yet he was acquitted.

“I am simply asking for what mine is rightfully; something that belongs to me and was illegally and wrongfully taken by Temba Mliswa.”

He added; “President Mnangagwa must show the world that Zimbabwe is open for business.

“My only crime was (bringing) Foreign Direct Investment (FDI) and Mliswa took advantage of the Indigenous Act.

“He asked for political favours from his uncle Dydmus Mutasa, an ex-Central Intelligence Organisation (CIO) boss and a former minister in Mugabe’s regime.”