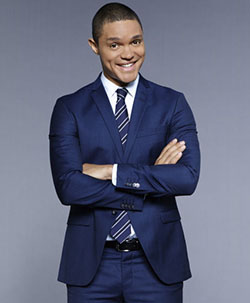 JOHANNESBURG: “You don’t overthrow a 93-year-old man, you just don’t wake him up,” quipped The Daily Show host Trevor Noah this week in reference to the current political situation in Zimbabwe.
Zimbabwe was thrown into political turmoil on Tuesday when the army seized control of the country and confined 93-year-old President Robert Mugabe into his house.
Mugabe, who has ruled the southern African country for 37 years, has reportedly agreed to step down next year.
But the army wants him to relinquish power immediately, with Emmerson Mnangagwa, the vice-president Mugabe fired last week, taking over as president.
South African born comedian Noah commented on the situation and compared it to the current political mood in the United States.
Advertisement