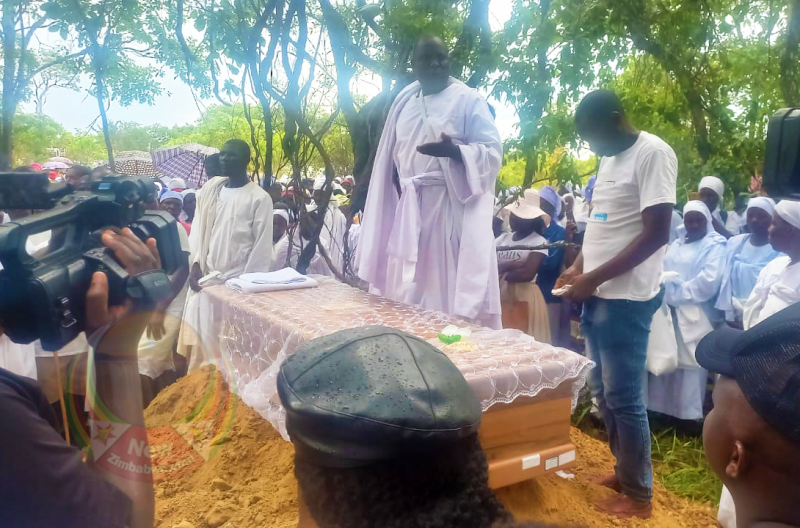 A Zanu PF official in Wedza has threatened villagers that they risk living in political turmoil if they do not vote for President Emmerson Mnangagwa in the up-coming elections.

The Zanu PF organ, Forever Association Zimbabwe (FAZ) official Tendai Mapako, who spoke on behalf of Zanu PF chairperson, Ward 4 (name not supplied), addressing mourners at the burial of Prophet Sirage (Crispen Kanerusine), warned that any other perceived leader had no place on the top post in Zimbabwe except for Mnangagwa, hence the need to register and vote.

Kanerusine was shot dead at his Johanne Masowe eChishanu shrine last Friday in Zinzombe Village, Wedza, by an ex-cop, Jaison Muvevi (43), who was later arrested in Mozambique.

Muvevi also shot dead Officer in Charge Wedza police station, Maxwell Hove and a civilian Munashe Munjani who have since been laid to rest as well.

Another police officer was critically injured during the shootings that left the Wedza community in shock and disbelief.

The warning comes at a time when the opposition members, mainly Citizens Coalition for Change (CCC), are facing attacks allegedly from the state security agents.

Mapako said the late cleric was both a church and a Zanu PF leader who was always ready to give guidance to the youths.

“His wish was for the people in this area to register and vote for President Mnangagwa so that he continues to rule our country. We thank him (Kanerusine) for his efforts. He played his part and now it is our turn,” Mapako said.

Mapako went on to say: “let us now follow the late Prophet’s footsteps by so registering to vote for our President. This is the only way we can live peacefully.

“When the bullets were fired, everyone ran for dear life and stayed in-doors for some days. Even after such an incident from a distance (7km away), no one came out of the house. Imagine if those bullets were fired at a close range (door-step), what would you do?”

FAZ paid US$500 towards funeral expenses for Kanerusine.

The reason behind the killings remains a mystery, although some church leaders have pointed out that the late Kanerusine had prophesied the deaths a few weeks before his demise.

She also urged villagers to return to their homes as the fugitive ex-cop was apprehended by police.

“The police Commissioner General (Godwin Matanga) has urged people in the surrounding areas to go out and do their home chores. The suspect has been arrested,” Munzverengwi told the media at the Kanerusine homestead.

Muvevi appeared in court on Wednesday and was further detained in police custody.