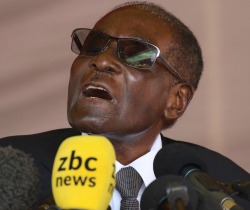 A LOSER is essentially someone who gives up before exhausting all available options. With that in mind, there is a very dangerous but widely accepted fallacy we must address, especially as we stare at the do-or-die 2018 elections.
That Zimbabwe is hobbling on its knees towards a total precipice is incontestable. At the epicentre of the rot and debilitation in Zimbabwe is the unmistakably conspicuous and fading figure of President Robert Mugabe.
Ever since the attainment of black majority rule in 1980, lurching from one political crisis to another, Zimbabwe’s political trajectory has been constructed around Mugabe.
Bar his reliance on uncouth and underhand methods, for 37 years Mugabe has been the strongman, standard, and bellwether of Zimbabwean politics.
By now he could be comatose, but the system still hinges around him. For as long as he is alive, sadly, there seems to be no prospect for that to change.
Radical reforms from within his party of sycophants are highly unlikely and would be doomed if anyone tried to initiate them. Even more sadly, from without, efforts to dismantle the corrupt system of patronage either lack the strength and political will to finish the job, or are themselves corrupted and antiquated.
It is this ugly reality which causes some people to pathetically and precariously hang their hopes for transformation on the thin and frail thread of the possibility of Mugabe’s death. That is a detestable product of myopia, fatalism, and cowardice.
Make no mistake; I am not under any illusion neither do I fall under the category of those clueless miscreants who believe that Mugabe possesses some supernatural powers. Die he shall, just like anyone else, but it is stupid for us to pin our hopes for change on the anticipation of his death.
The argument which is brought forward by the proponents of the warped theory that transition will be caused by Mugabe’s death is premised on somewhat unrealistic projections and assumptions.
Firstly, nobody knows the day and time Mugabe is going to die despite the fact that he is increasingly succumbing to the inescapable pressure of his advanced age.
Ever since my high school days, the possibility and imminence of Mugabe’s death have always been the subject of much speculation. In fact, almost every year, he is rumoured to have died only to resurface somewhere with his mischievous smile. Advertisement

Secondly and most importantly, when analyzing or dealing with Mugabe, it is imperative to note that he is now more than a person. He is a system, an idea and a way of doing things. Mugabe, the person, may and will die but that won’t mark the end of Mugabe the system, idea, and way of doing business.
Indeed, there is a huge possibility that the death of Mugabe the person may upset Mugabe the system, approach, and way of doing things but there is more we can project.
His death may accord Mugabe the system, idea, and way of doing business an opportunity to regenerate, reinvigorate and refocus, morphing into a much stronger outfit.
If Mugabe dies in power, that will be a monumental and generational political travesty. It will be a mockery of history-making proportions. Not only that, it will be an opportunity for the system to embolden its grip on power.
It, therefore, stands to reason that waiting for Mugabe to die, hoping his death will usher in change is not only an act of cowardice but stupidity. We must not wait for Mugabe to die, we must face him head on and deal with him. Our hopes for a better Zimbabwe must not be predicated on the anticipation of his death neither should we give him the satisfaction of living out his days scornfully urinating on your our heads.
We must remove him from power by any constitutional means possible. We must challenge him out of power. We must vote him out of power. We must pressurize him out of power through widespread unrest, agitation, protests and mass resistance.
I cherish the idea of Mugabe living to witness the transition into a new dispensation.
A new and better Zimbabwe is possible in our lifetime. We shall come face to face with it.
Patson Dzamara is a leadership coach and author, political activist, and analyst based in Zimbabwe.