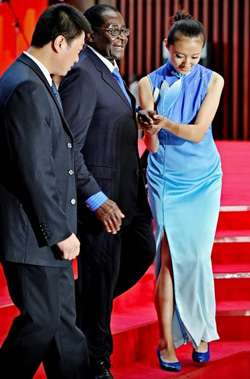 THE Zimbabwean government adopted the look East Policy after falling out with the West. This look East Policy has however not been of much help to the country because – just like the name implies – it is merely a look at the East rather than to look, learn, engage and adopt what the East is doing when compared to what is happening and being achieved in the East especially by a country like China.
There is too much activity in China so far, as an independent state as well as in its cooperation with the other countries all over the world. And, therefore, considering the progress that is so evident in the economies of the East especially China it would be difficult for any country to interact with them and fail to register economic progress. As such if our Look East policy was meant to look, learn and apply, Zimbabwe could have reverted back to its coveted status of being the bread basket of Africa and could have achieved other accomplishments worth of positive global attention.
China’s economy is being premised on its ability to interact with other countries including the United States of America, Britain, Germany and other European countries. Multimillion dollar transactions have been signed between China and these countries in which China has opened up for investment from these countries while Chinese investors are being welcomed to reciprocate the favour.
In one notable case the Chinese investors have been welcomed and thanked by the British premier, David Cameron, for a deal in which they are going to invest in the nuclear energy facility and the HS2 rail projects in Britain. Cameron said the people of Britain would not be disturbed by the nuclear project since it is not going to be funded by their taxpayer’s money but was going to be funded by the Chinese investment.
China and America also have a number of initiatives for mutual benefit including the Educational Exchange program among the 100 000 strong initiatives launched in 2010 in Beijing by then American Secretary of State Hillary Clinton. As reported in local media, China did engage some funds close to $198 million from 1990 to 2010 in seed funding for the Chinese student studying abroad who choose to come back and work in China. China was also said to have adopted its Thousand Talents Plan in 2008 in a move through which the government is trying to convince the overseas Chinese to return home in order to close the talent deficit resulting from brain drain. Under the plan returning top scientists and entrepreneurs are offered as much as $150,000 in cash, office and laboratory space, housing allowances and school entry for children.Advertisement

China has also another long term plan set to run from 2010-2020 called the Medium and Long Term Talent Development Plan which aims to attract 2,000 specialists in IT, Biotechnology, aerospace, environmental protection, agricultural technology and transportation. A leading American university, the Massachusetts Institute of Technology has seen it fit to engage China as evidenced by what Victor Zue, MIT Electrical Engineering and Computer Science Professor and Chairman of the MIT Greater China Strategy Working Group reflected on behalf of his boss Rafael Reif who said if they don’t engage China now, 10 years from now they will have to take a number two.