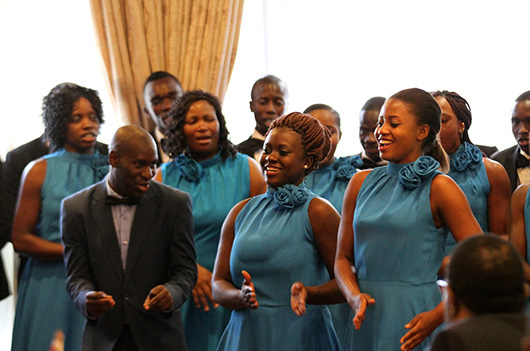 GLOBALLY acclaimed Zimbabwe choral group, Chitungwiza Harmony Singers (CHS), will join 11 other choirs in Bloemfontein South Africa next week for the Old Mutual national level final competition.
The 60-member group will compete in the standard category on the 12th and 13th December 2015.
The four-time national merit award winners claimed the South African Old Mutual Regional choral competition for the fifth time in August this year. They also won the regional choral competition in 1999, 2003, 2005 and 2011.
In an interview with NewZimbabwe.com, CHS marketing manager, Peter Thole, said the group has been rehearsing ever since its return from the regional competition in August.
“The choir is geared for this respected competition and morale in the camp is very high,” he said.
“We are taking the full orchestra, and we will sing one western, one African and one song of our own choice.”
He added: “Financial constrains have been our major setback this year but, because of God’s grace, we always see ourselves pulling through.
“This time we promise to bring the trophy home having come second in 2012.”
A member of the group Judith Gwande said winning the regional competition in August was morale booster.
“The national finals are a tough competition and the choir members knows that very well.
“But judging by our practise sections, the trophy is definitely coming to Zimbabwe this year.”
The choir has also been doing a lot of fundraising activities to raise money for air tickets, having been invited to the Tenth International Choral Festival in Missoula, Montana USA which is scheduled for July 2016.
Chitungwiza harmony singers is a brainchild of founder the late Israel Dzangare. The group can sing in Shona, Xhosa, Zulu Germany and French, among other languages.    Advertisement