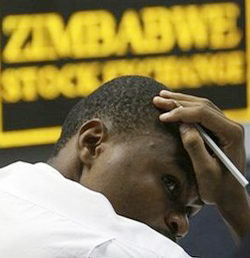 WEAK sentiment continued on the Zimbabwe Stock Exchange (ZSE) this week, with the outlook likely to remain in the negative as investors are still digesting the line-up of the new cabinet.
Increased concerns over how the new cabinet would handle the economy continued to overshadow the buying interest in most counters on the stock market.
The bearish trend has been worsened by the miniscule funding that is available on the market and intense money market illiquidity.
Analysts said some investors were taking positions ahead of the policy pronouncements that the government would adopt.
Zimbabwe Stock Exchange (ZSE) shares opened the week in negative territory in lacklustre trades as investors remained cautious over the stock market following the appointment of a new cabinet last week.
Turnover was weak at below US$567,704 from 51 trades made up of US$99,970 foreign purchases while foreign sales were at US$4,000.
At close, the Industrials Index was down 0,3 percent to 187.78.
There was mixed trade in Tuesday’s mixed session as investors continued to search for impetus to move sentiment strongly in the northward direction.
At close, the Industrials Index had a 0.2 percent uplift to 188.15c although trading remained mixed as the country officially opened its Parliament.
On Wednesday, gains in BAT, Econet and Old Mutual were enough to sustain the stock market’s second consecutive gain as investment sentiment slightly improved although trading remained mixed.
BAT, which could have reported an interim profit were it not for the once-off indigenisation expense, was 50c higher to 10.50c taking its year to date gain to 191.67 percent.
Econet put on 0.5c to 50.50c after the group pledged to enhance shareholder value at its AGM on Tuesday.
The firm trades saw the Industrials Index close with a 0.22 percent uplift to 188.56 while the Minings Index remained flat at 48.56. Turnover was around US$1,54 million.
The country anticipates a flurry of new investment particularly in the diamond sector following the EU’s decision to lift sanctions on ZMDC diamonds.Advertisement