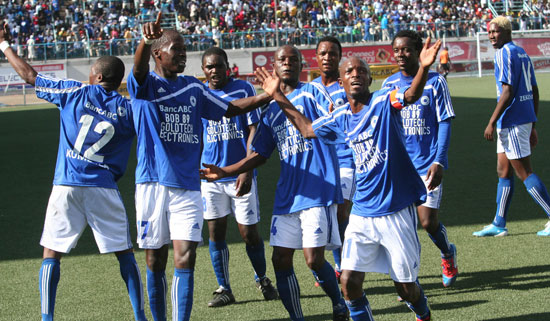 DYNAMOS will limp into Barbourfields Stadium on Sunday against old foes Highlanders without five of his key players but will welcome back the duo of Takesure Chinyama and Rodreck Mutuma for the EasyCall Cup semi-final clash.
The duo was slapped with four game bans for abusing a match official when they lost to Harare City 2-1 in the Chibuku Super Cup at the end of October, but they have appealed the decision making them available for the match.
Dynamos had threatened to boycott the match, claiming unfair punishment on his star players but a meeting on Thursday between the club’s leadership and Premier Soccer League chairman Twine Phiri cleared the air.
Dynamos secretary-general Webster Chikengezha said: “We met with the PSL chairman.
“We had a two-hour meeting in which we laid down our grievances. He is attending to the issue. In the meantime, we have also lodged an appeal with the Premier Soccer League.
“We are now going to Bulawayo for the Easycall Cup semi-final against Highlanders pending the determination of the appeals.”
The players were found guilty by the PSL disciplinary committee of charging at referee Philani Ncube in a violent manner and uttering unprintable words.
Meanwhile, defender Sydney Linyama, striker Kelvin Bulaji, Stephen Alimenda, Obey Mwerahari and long-term casualty Artwell Mukandi will also be missing from the match due to injuries while Masimba Mambare, who has had a tough two years at Dynamos, has just returned to training.
Violence concern
Coach Tonderayi Ndiraya chose not to focus on the match on Sunday, but perceived violence at Barbourfields, forgetting that in their visit against Tsholotsho where they were held to a 1-1 draw after Alimenda scored a 90th minute own goal, it was his team’s fans that were at fault as they threw missiles into the field of play and forced the Supersport crew to flee.
“There is a record of violence each time we play against Highlanders at Barbourfields and we are afraid it will happen again,” he said.
“And because of the violence, sometimes the match officials will not be fair particularly on us because of fear of violence.
“We are just hoping that those things will not happen and that we get a very level playing field and good officiating.Advertisement

“We have suffered in the past few seasons from bad officiating and games of this magnitude would really need referees who are sober-minded and fair to both teams.”
Highlanders technical director Cosmas ‘Tsano’ Zulu said Friday his side was preparing for the match like any other game and were not worried about statements from their opponents.
“I would like to talk about the game, not what they are saying, they are always saying that,” he said.
“We have a full squad to choose from and we will fight hard to reach the final of this competition.
“We finished the season in a very respectable sixth place on the log and I can say everybody is inspired to do well in the match.”
Highlanders will welcome back striker Knox Mutizwa from his trial stint with Bidvest Wits in South Africa on Saturday afternoon.
Mutizwa, the 2015 Golden Boot Winner, went to South Africa on Monday and was due to play his second match on Friday night before flying back to Bulawayo on Saturday.
“We hope he will not pick up any injury in today’s match (Friday),” Zulu.