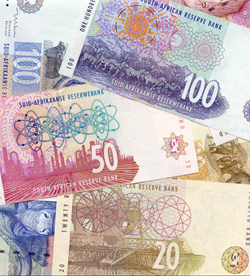 A WEAKENING South African Rand has hit businesses and ordinary people in Bulawayo and the rest of the Matabeleland region where the currency is the most popular of the basket of foreign money being used in Zimbabwe.
The government ditched the Zimbabwe dollar in 2009 after the currency had been rendered effectively worthless by hyperinflation with authorities introducing instead a handful of foreign currencies such as the US dollar, the Botswana Pula and the South African Rand.
The Rand proved popular in Matabeleland region because of its proximity to South Africa with people there not experiencing the same problems with change as the rest of Zimbabwe.
At the time multi-currency regime was adopted, the Rand was trading at around nine units to the American dollar but it has since weakened to just over 11 units to the Greenback this week.
Affirmative Action Group (AAG) Vice president Sam Ncube said people in Bulawayo and the Matabeleland North and South provinces were feeling the pinch.
“Unfortunately Bulawayo has always been attached to South Africa,” he said.
“Now that most of the people here use the Rand and it keeps on losing value to the US$ this is indirectly or directly affecting people in this region. Our appeal to the powers that be is if we can use one currency.
“I know this is a catch 22 situation but we need to put our heads together and come up with better solutions and think of ways of addressing the economic challenges facing our economy.”
Fast food entrepreneur Stanley Ndlovu said profits were being eroded on a daily basis and warned that companies may be forced to shut down.
“My brother, business is about profit but what is happening now is like I am just giving people food for free during the day,” he said.
“So it is better I stop now until things have improved or else I will lose all my investments trying to cover up for the losses.”
The development comes as some industry leaders have urged the government to drop the US dollar because it was making production costs too exorbitant and the country’s exports uncompetitive in regional and global markets.
Former Confederation of Zimbabwe Industries (CZI) president Joseph Kanyekanye recently said Zimbabwe must eliminate the $US and adopt the Rand in order to be competitive in the region.Advertisement

“It is only logical that we should use the Rand as a currency,” he said.
“It (the Rand) has depreciated 40 percent in the past year, which works to our advantage. We have to dispel this notion of an academic comfort zone that we will only adopt a certain currency after certain optimum conditions are achieved.”
Finance minister Patrick Chinamasa has however, insisted that current multi-currency regime would remain in place for the next five years.