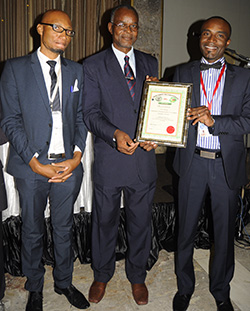 ONE of the country’s biggest web designing companies, Zimhost, claimed the web designer of the year at the Zimbabwe Chamber of SMEs exhibition recently held at the Harare International Conference.
This is the third time the company has won the same award.
Project manager Pearson Pfavayi said the recognition was an indication of competency which the company was aiming to scale up.
“Such an award simply goes to show the appreciation of our work and services within the industry.
“With our website prices starting from as little as $50 – a once-off payment including a free domain – we have made websites very affordable as the general belief was that websites were for the rich and very unaffordable,” he said.
In February this year, Zimhost.com was named the ‘best web designer of the year’ at the Zimbabwe Business Awards.
In October 2014, the company was also voted the ‘innovative company of the year’ at the Small to Medium enterprises International Expo.
The company also won two similar awards in the UK at the ZimAchievers Awards as well as at the Southern African Achievers Awards.
Zimhost.com, which has operates from Harare and Bulawayo with its head office in the UK, specialises in designing websites targeting SMEs and large corporate enterprises.
It is well known for designing fully functional websites from $50 within 48hrs and can, on average, complete up to 30 websites per month or 360 websites per year.
According to the company’s sales and marketing executive, Shingie Chiinze, working closely with their clients has yielded exponential results.
“We believe in a one-to-one approach and are always ready to visit new or existing clients for free to solve any challenges they might be facing.
“The three recent awards have really overwhelmed us with a lot of work but we are still open for new workload and challenges.
“We always visit clients at their preferred location for any initial consultation bookings or appointments,” he said.
Advertisement