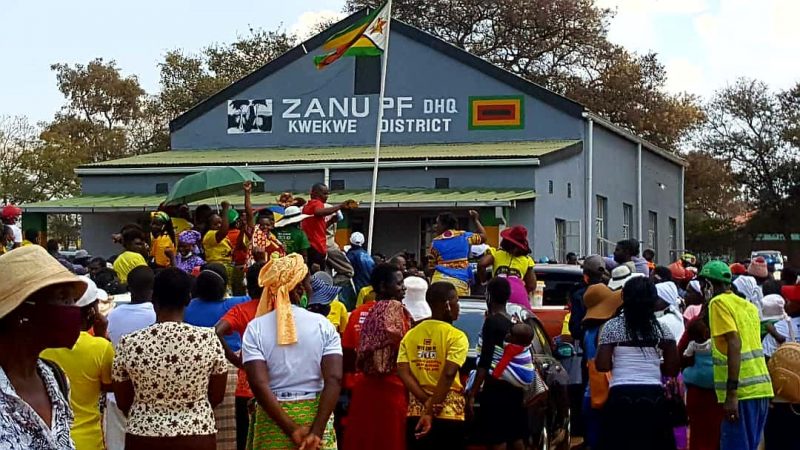 ANGRY Zanu PF supporters in Manicaland province have threatened to vote for opposition leader Nelson Chamisa in the 2023 elections as a way to vent their anger over rigged internal party elections.

Zanu PF last week conducted provincial elections, which were in most districts marred by reports of vote-buying, violence, and massive rigging.

Madiro, who is also the Deputy Home Affairs Minister, was battling it out with Albert Nyakuedwa for the top post.

However, well-placed sources in Zanu PF claim Nyakuedwa won the election, but the poll was rigged in favour of Madiro.

In the women’s league, Nyakuedwa was contesting against Chido Sanyatwe, a Nyanga legislator and the wife of Zimbabwe’s ambassador to Tanzania and former presidential guard commander, Anselem Sanyatwe.

In the youth league, Sakupwanya was contesting against the district coordinating committee (DCC) secretary for youth affairs Danmore Mambondiyani.

However, the losing candidates have lodged complaints with the Politburo claiming the voting process was rigged.

The disputed results of the controversial polls have forced the disgruntled party’s faithful members to issue threats they will vote for MDC Alliance president, Chamisa in 2023.

Chamisa was narrowly defeated by Zanu PF’s presidential candidate Emmerson Mnangagwa in the 2018 elections. The two are expected to square off again next year.

However, Zanu PF insiders who spoke to NewZimbabwe.com Monday said party members were unhappy with how last week’s elections were conducted before threatening to vote for Chamisa if their grievances were not resolved.

“We are going to implement the ‘Bhora Musango strategy’ ahead of the 2023 presidential elections because these internal elections were not legitimately conducted,” one insider said.

“In Makoni, the polls were delayed as the vehicle that was supposed to ferry the ballot papers arrived without them. Election coordinators claimed there was a mix-up.

“However, we suspect it was a deliberate move to influence the outcome. We cannot remain docile as our internal elections now lack transparency.”

Another supporter added: “It is worrisome and disheartening that some candidates who won according to preliminary results did not have support across the province.

“How can someone win with a wide margin yet they have lost support in the party? If the party’s leadership fails to address these legacy issues, we will easily change the goalposts in 2023 and vote for Chamisa.”

A war veteran also expressed his deep concerns over the slow pace Zanu PF was taking in announcing the final results.

“Just imagine, we had to wait for three days for the results to be announced. After the results were announced, the leadership still claimed there is no winner or loser. This shows that something fishy is happening and we will not condone this,” he said.

However, in a statement Sunday, Bimha said the Politburo would meet this week and deliberate on the elections, complaints lodged, and issues of violence before announcing the winners.

“We would want these cases to be fully investigated. Where we have candidates that would have been in cases of violence, such candidates will be disqualified and furthermore, be subjected to the party’s disciplinary procedures,” he warned.