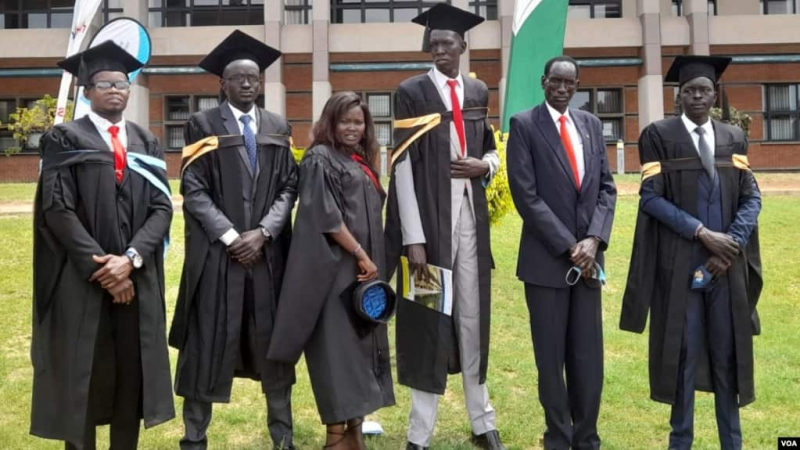 Some of the Sudanese students stranded in Zimbabwe
Spread This News

SEVEN of the 14 South Sudanese graduates stranded in Zimbabwe’s second-largest city, Bulawayo, have received air tickets from a well-wisher following the publication of their appeal for assistance.

A representative of the students, Ajal Bol Gai, says a well-wisher in South Sudan bought the tickets but they are not yet out of the woods because each student needs to undergo a Covid-19 test, which costs US$60 before they catch their flight on Friday.

Bol Gai says: “They are electronic tickets which have already been sent to us and so we have them on our phones. When we go to Harare we will get our boarding passes. That’s all we need and so we will be going to South Sudan definitely. The only thing that is left that the well-wisher was not able to provide was the issue of the Covid-19 test, the PCR. Hopefully, we will find a good way of getting this too.”

“We got the air tickets through an interview we did with Ezra Sibanda on campus during our graduation that was on Friday … We were not sure when we were going to get our air tickets and so I responded by telling him that we don’t know because our government had not made it clear to us yet on when they were going to send our air tickets. After the interview, the Voice of America’s Studio 7 published the news and it got a lot of reactions.

“… I know the importance of the media. Other people may not know. I know the power that the media have. Whenever something gets into the media I know definitely that it will get the attention of everyone and we thank the Voice of America for being the voice of the people because if I was talking to myself no one was going to hear me but because I talked to the Voice of America that’s why our assistance has come on time and now we will rejoice. We will be with our families, our friends, and relatives we have been with them for the last six years or so.

Bol Gai says he understands some people, who were criticizing them for not being innovative in raising their own funds for purchasing air tickets.

“There are people who were criticizing us for not being creative in getting our air tickets on time. Some people don’t understand that when you are at school there are things that you cannot do. We can’t have any other place where we can get out there and get assistance. This is not the U.K, this is not the U.S., it is not Australia. It’s here in Africa. It’s not easy.”

The well-wisher in Juba was unreachable for comment while the Sudanese Embassy has not yet responded to our emails and text messages.