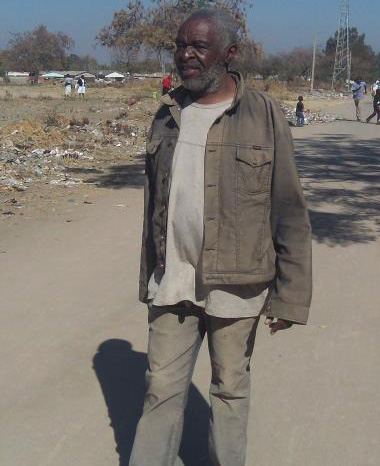 BUSINESS people, politicians and other well-wishers have come to the rescue of veteran broadcaster, actor and comedian Lawrence Simbarashe, 63, with donations of groceries and thousands of dollars in cash.
Now known as Mudhara Bonzo, Simbarashe was also given a bed, a TV set and clothing with businessman Stan Kasukuwere pledging to take care of his medical bills.
The help comes after an exclusive story published by NewZimbabwe.com last week highlighting his abject poverty.
The veteran actor who was once the main act in the country’s entertainment industry having featured in the Timmy na Bhonzo ZTV drama series and films such as The Slit (1996), Jit (1993), Cry Freedom (1987) and Flame (1996).
This brought Simbarashe fame and fortune but he squandered his earnings and is now penniless.
Zanu PF politician and Member of Parliament for Highfield constituency Psychology Maziwisa, accompanied by Bhonzo’s longtime friend and actor Timothy Tapfumaneyi and broadcaster Oscar Pambuka to donate the goodies.
The legislator said Bhonzo did a lot for this country in the entrainment industry hence the need to appreciate him while he is still alive.
Mazivisa told this publication that after news broke that Mudhara Bhonzo was in dire straits, he felt that something needed to be done urgently.
“For me personally because my parents are late, helping someone like him, I felt like am helping my own father,” said the MP.
“Here is the man who entertained us for decades with his extraordinary sense of humor and putting a smile on his face is also important.
“The man made us laugh during good and bad times and it’s our time to do the same, let’s put a smile on his face.”
Bhonzo’s friend, Timothy Tapfumaneyi, said this is a complex social issue and people must not just scratch the surface.
“There is need to do a man hunt for Lawrence Jr, Leona and John who are believed to be in the UK, Netherlands and South Africa respectively
“They can also provide an answer as to why are these children not looking after their father,” he said.
Bonzo’s life story is like a script for the dramas that he used to act during his heydays.
The veteran actor now resides in Chitungwiza, St Mary’s high density suburb, at a house he inherited from his parents.Advertisement