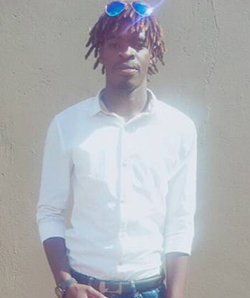 HE is young, gifted with a golden voice, has very big dreams and he has come to conquer. Meet Maxwell Sakuhuni, a.k.a Wellow, the freshest voice in Zimdancehall!
Although he started his music career way back in 2012, Wellow only realized early this year that he has what it takes and can go places with his music.
“It all started when I was doing my Ordinary Levels and I met up with some friends who also had an interest in music and we would find time to sing and play around with beats,” Wellow told NewZimbabwe.com recently.
“It then dawned on me that, since my days at primary school, I had always wanted to sing and that is when I felt I should seriously consider music as a career.
“I then started recording singles with guys like Cash Lips and PTK and would do two or three songs per year which I never really bothered to market seriously although they were well received in my hood.”
He said, as a result, his songs were rarely played on national radio although he has been on the Young Gifted and Talented show on ZTV, which features talented upcoming talented artists.
Wellow said he has now set his sights on recording a new six-track album, titled Kwatakabva Kure.
“I am now working on my first ever album and it will feature two of my songs from the past namely Mushonga Wema Baby Kugeza and Mai Makaenda Musina Kutaura. The other four songs are still work in progress but they should be out soon.”
He said his greatest challenge now was finding a manager and promoter to help him manage his career and market his music.
“I think that if I can get a good manager and promoter I will go places with my music because my family has realised the talent in me and is fully supportive,” he said.
The 22-year-old says he was inspired by other Zimdancehall artists such as Freeman, Winky D, Killer T and Guspy Warrior, adding he would be delighted to do collaborations with any one or all of them.
He said his music speaks to the social life and the day-to-day struggles of ghetto life, where he grew up in.
“I write my own songs, and I am inspired by the day-to-day living of the people in the ghetto, especially the youths.
“I try by all means to avoid controversy and explicit lyrics and want to send out conscious messages that help the youths choose the right paths in life.”Advertisement