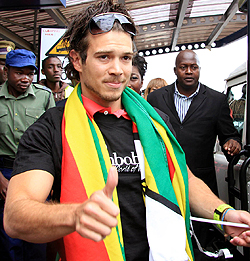 FORMER Big Brother Africa star, Wendall Robert Parson, 25, who was facing fraud charges over a US$25,000 insurance claim walked free Tuesday after a court ruled that he had no case to answer.
Harare magistrate Elijah Makomo acquitted the 2011 BBA joint winner – who was charged with his brother William Lorenzo Parson – at the close of the state’s case.
Makomo said he had found evidence against pair too inconsistent to warrant putting them to their defence.
Prosecutors had argued that when Wendell filed a claim for his Ford Ranger vehicle after crashing the car while driving from Bulawayo on March 16 this year he was not insured with Alliance Insurance, the firm which pressed the fraud charges against him.
But Wendell said at the time of the accident, he held a valid comprehensive cover note issued by Amer Khan Insurance brokers (AK Insurance) on February 20 this year.
Prosecutors questioned the validity of the cover note arguing that the document had been invalidated by the star’s failure to make payments at the time the accident occurred.
However, the court established that it was the habit of the insurance company to issue cover notes to certain clients even before they could make any payments, rendering Wendall’s insurance cover valid at the time of the accident.
Makomo said the absence of any written communication advising Wendell of the purported invalidity of his insurance prior to the accident meant that he remained covered and was entitled to make a claim.
The cancellation was only effected on July 18 this year, long after the accident had occurred.
In his ruling, Mukono said: “Now, if the cover notes represent insurance and those cover notes having not been cancelled as at 8 July 2013, the inescapable conclusion would only be that no misrepresentation was made because the accused were entitled to claim.
“All the other discrepancies by Mukwesha and on the claim form or police report become peripheral. The bottom line is that they were insured. There is therefore no evidence upon which a court, acting carefully, might properly convict.
“Having come to this conclusion it becomes unnecessary to consider whether the evidence has been utterly discredited as a result of cross examination so as to make it manifestly unreliable.Advertisement

“In the result, the court has no discretion to place the accused to their defence in order to clarify certain issues and plug the gaps in the state case. Accordingly, the accused will be entitled to their discharge at close of state case. They are therefore, found not guilty and acquitted.”