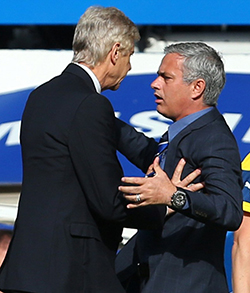 ARSENE Wenger was adamant he had no need to reproach himself after shoving Chelsea boss Jose Mourinho in Sunday’s 2-0 loss at Stamford Bridge.
Chelsea extended their unbeaten start to the Premier League season and their lead at the top of the table to five points from Manchester City after Eden Hazard, with a penalty, and Diego Costa scored in a match which saw the managers’ feud turn physical.
In 12 attempts the Frenchman is still to taste victory against a Chelsea side managed by Mourinho, whom he pushed after Gary Cahill’s tackle from behind on Alexis Sanchez in the 20th minute.
Mourinho told the Frenchman to “back off” as the Gunners boss firmly planted two hands on the Portuguese’s chest – risking Football Association disciplinary action – and the pair also eye-balled each other in close quarters.
Of course, this is not the first time the two managers have clashed. The pair have a long history of conflict.
On Friday Mourinho refused to apologise for labelling Wenger “a specialist in failure” and their latest contretemps will have soured the relationship further.

WHAT WENGER SAID
Asked if he rued the fracas, Gunners boss Wenger said: “No. What is to regret after that?
“I wanted to go from A to B and somebody confronted me in between without any sign of welcome. B was Sanchez, to see how badly he was injured.
“Honestly I don’t listen to what he says.
“Look I trust you that you (the media) will teach me all the moral lessons over the next three weeks. And I can accept that.”
Wenger admitted it was a push, saying “a little one”.
He added: “I can try to push you. You can see when I really try to push.”
WHAT MOURINHO SAID
“Forget that (the push). Sometimes you lose emotion and I did so many wrong things, but not this time, because this time I was just in my technical area and it was not my problem.
“There are two technical areas, one for me, one for him. He was coming to my technical area and he was not coming for the right reasons.
“He was not coming to give some tactical instructions or something.
“He was coming to press the referee to give a red card and I didn’t like that.”Advertisement

WHAT THE MEDIA SAID
Matt Butler, (The Independent): Arsene Wenger vs Jose Mourinho was hilarious so why did pundits dodge it?
Sure, there were other subjects worthy of discussion, namely a penalty given after Laurent Koscielny’s trip on Eden Hazard and the debate over whether Gary Cahill should have been sent off, but the set-to between the two managers deserved more than a cursory couple of seconds’ worth of discussion.
For a start, it was hilarious to see how childishly the two men were acting.
But Souness and Neville barely broached the subject, preferring instead to speak about events on the pitch.
The discussion was diverting enough, but no different from the same stuff we get served up every week by the Super Sunday mob.
Their defence may be that there wasn’t much to say about the bust-up, but there was – namely how funny it was.