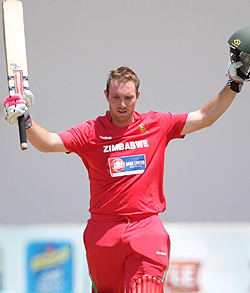 Zimbabwe v Bangladesh, 2nd Test, Harare
April 25-29, Harare
Start time 1000 (0800 GMT)
ZIMBABWE have not been in the position to win a series in nine years. The last time they led 1-0 was against Bangladesh in February 2004 and they went on to clinch the series with a draw in the second Test.
They previously won back-to-back Tests 12 years ago, when they beat Bangladesh in both matches of the April 2001 series. And that was only the second time Zimbabwe have managed consecutive Test victories. The other was in 1998 when they defeated India in Harare in October and Pakistan in Peshawar the next month.
They have only ever won 10 Tests in their 21-year history but have claimed six series wins. Four of them, including the one-off triumph in August 2011, were against Bangladesh and one each against India and Pakistan.
Where they stand now would allow them to better all the above records.
“Everyone realises there is something great for us here,” said captain, Brendan Taylor. “There will be a few nerves because this is really big for us. Even 10 years ago, with the players we had then, they struggled to win series. We’re in a bigger pool at the moment and if we can get this away, we can send a big message to the world.”
The point Zimbabwe would make would not simply be one of numbers. It would be that of a triumph against adversity, achieved against the backdrop of irregular international competition and financial problems that threatened to detail preparations ahead of this tour.
“It will give us dignity in the cricket world,” Stephen Mangongo, the interim coach, said. It will also go some way to enhancing Zimbabwe’s sporting reputation, as a team and for the individuals involved.
“We want to be counted up there as a serious cricketing nation. We’ve got a vision and our players want to belong at the highest level and to be respected,” Mangongo said.
After the first Test, Taylor’s stocks soared. He achieved his highest Test score and became only the third Zimbabwean to notch up a century in each innings of a Test match. Kyle Jarvis, Shingi Masakadza and Graeme Cremer also earned praise. Now it’s up to the rest to leave a mark on the series, especially with the bat.Advertisement

Without Taylor, the first Test would have been a close contest and Bangladesh have isolated him as the man to dismiss early. Attention is focused on the captain but he has worked to deflect it and put responsibility on the rest of the line-up.
“We’ve got quality players who are due for some runs,” Taylor said. “I’m confident there will be 10 other players contributing as well.”
With expectations on everyone high, it could be easier for Zimbabwe to sit on their 1-0 lead and wait for Bangladesh to dictate the course of game. But the conditions, which are expected to be seamer-friendly on the pitch and overhead, may not allow that.
Taylor admitted both sides would want to bowl first but that Zimbabwe are ready if they are put in to bat.
“The first hour is not going to go the batsmen’s way but that’s Test cricket. You’ve got to back your technique. We know if we can get through the first hour, it tends to get flatter,” Taylor said.
Whether they are put in or not, Zimbabwe have indicated they will be on the offensive at the earliest opportunity. They do not play another Test for at least three months and they want to make as good an impression as they can against a struggling Bangladesh.
“We don’t want to be too conservative. We want to make it tough for Bangladesh. If we aim to win each session, we will dominate. It is tough for any team to come back from a 300-run defeat but we know there’s no room for complacency. There’s added pressure to win this match but we understand that.”
Apart from their own hopes, Zimbabwe carry the dreams of a nation and they are determined not to let their fans down.
“It’s been overwhelming. There’s huge expectation all around,” Taylor said. “I’ve had countless Facebook and Twitter messages. Hopefully we can give our fans more to smile about. They’ve always rallied behind you and we owe it to them to do well.”