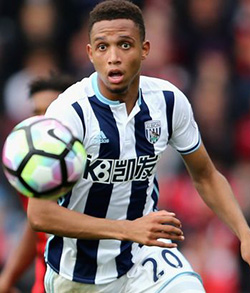 UK: West Bromwich Albion manager Tony Pulis has insisted that Brendan Galloway still has a future at the club, despite the 20-year-old not having played any football for the club since September.
Galloway’s last appearance for the Baggies came in the impressive 4-2 home victory over West Ham when he was substituted for Allan Nyom, who although traditionally a right back has remained in the starting XI on the left side of defence ever since, at the expense of the England under-21 international.
​Speaking to the​ media, Pulis suggested that Galloway may return soon due to other players being at risk of one-match suspensions for having too many yellow cards.
“Brendan’s been unlucky and he’ll get his chance because we’re now getting bookings, Daws has got four, if he gets booked again he’ll miss a game so Galls will get his chance.”

Despite affording limited game time the Zimbabwe-born left back, Pulis was complimentary of his young charge.