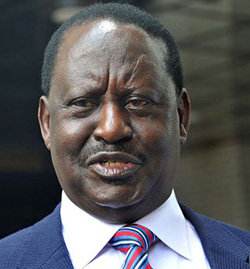 NAIROBI: Eleven western envoys, including those from the U.S. and Britain, Sunday urged Kenya’s opposition leader to recognize President Uhuru Kenyatta as the country’s legitimately elected leader.
The diplomats said Odinga needs to accept Kenyatta is president “as the basis for the dialogue that it (the opposition) and many Kenyans want.”
“We are deeply concerned by recent political developments in Kenya. Both the government and the opposition have taken steps that have undermined Kenya’s institutions, and driven wedges among its citizen,” said the statement released Sunday.
Opposition leader Raila Odinga held a mock inauguration Jan. 29 in which he was sworn in as the “people’s president.” The government reacted by shutting down some broadcasters and arresting some participants.
The government also deported Odinga’s advisor Miguna Miguna despite five court orders saying he should be produced in front of a judge and released on bail.