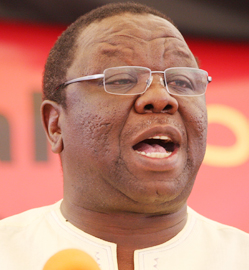 “FOR the powerful, crimes are those that others commit,” writes Noam Chomsky. This quote paints a constant fundamental reality in global politics that Zimbabweans, young and old must begin to comprehend when reading our country’s relationship with the world.
For it was through external machinations that we became directly apprehended by the claws of economic sabotage all in the name of violating so called human rights, an argument yet to be justified.
Certainly, Zimbabwe was found to be in desperate need of assistance that led to the creation of an entire policy. The purpose of the legislation as stated within the policy tilted ‘‘Zimbabwe Democracy and Economic Recovery Act of 2001’’ was to support the people of our beloved country  in what the American congress termed our struggle to effect peaceful, democratic change, achieve broad-based and equitable economic growth, and restore the rule of law. A gift granted without request, oh sorry the request existed but only from the opposition party led by Morgan Tsvangirai.
The Telegraph report of the 14th of Jan 2002 quotes the opposition leader as having said “after two years of “softly-softly” diplomacy by Zimbabwe’s neighbours, which had failed to stop President Mugabe’s abuse of the rule of law, it was time for genuine sanctions. Targeted measures should be imposed immediately to freeze money and assets held overseas by Mugabe and his associates, while South Africa should impose a fuel, transport and electricity blockade”. It would help the reader to place an emphasis on the last three requests and correlate the times the plea was made to assess the impact these sentiments had on the ground. If you lived in Zimbabwe between 2001 and 2008, I would assume that the choking retrospection of long fuel queues has not yet escaped you; notwithstanding the scathing irony, the pursuit of our human rights.
What is never told about the Zimbabwean story besides the gloomy pictures portrayed in the media is the effect of the cooperative sanctions imposed by the US, Canada, New Zealand, Australia and the European Union. An impact so detrimental to the extent of declining  key sectors of the economy occasioning high unemployment, an inefficient health delivery system, reduction in FDI and the drying up of balance of payment support; all in the name of democratic principles. However, the oxymoronic factor of it all is the US tradition of turning a blind eye to countries that in point of fact do violate human rights. A recent case in point would be the beheading of 47 people including the prominent Shia cleric Sheikh Nimr al-Nimr in Saudi Arabia.Advertisement

The incontestable failure to act by the West, not only demonstrates glaring hypocrisy but also how they tend to argue human rights violations as a pretext towards countries that fail to fall in line with their economic interests.  This is well encapsulated by Henry Kissinger when he says “America has no permanent friends or enemies, only interests”.  This may explain why they continue to ignore the Saudi government’s systemic abuse of human rights violations and also endorse the Saudi’s desire to chair a UN committee that is responsible for safeguarding fundamental rights. It is beyond flabbergasting but not really if you consider the fact that the Saudi’s are America and Britain’s biggest weapons market. The latest contracts between the US and Saudi Arabia include $24 million for Raytheon Company, $12 million to Advanced Electronics and millions more for Boeing’s laser air-to-ground weapons system. Not to mention the recent $15bn weapons contract between Canada and Saudi Arabia which is reported to be the largest arms deal in the country’s history.  So, how is it that the so called fathers of democracy and rule of law remain mute in the face of irrefutable evidence of the Saudi’s human rights violations while simultaneously trading with the violators in question? Well, like the English would say, the proof is in the pudding.
Meanwhile, the Zimbabwean sanctions still remain with dire effects that need no scientific analysis; all this in the face of commodity price fluctuations, along with the globalisation of the world economy and increased liberalisation of commodity markets leading to profound changes that have seriously affected not only the Zimbabwean economy but most emerging markets as well.
Notwithstanding, the successive years of drought to an agro-based economy. It is beyond reasonable doubt that these very factors highlight the importance of cultivating a collective consciousness and pragmatic approach to these critical issues. We must understand the primary objectives of these sanctions and how they impact us as a people and begin to collectively call for their removal. This should be done unreservedly as a matter of national security and be seen beyond partisan interests.
Since history is the only laboratory we have in the human experience we must not ignore its teachings. For instance, it is no coincidence that countries like Iraq, Libya, Syria, Lebanon and Jordan have faced US aggression purely because Pan-Arabism is an ideology they pursue. It is therefore important to unite behind this cause and make the case for our country. We must not be seduced by democratic dogma shrouded in false nobility. This would be an insult to the collective intelligence our nation holds.  Doing so will help us establish innovative mechanisms to counter the economic aggressions we currently face.
In addition, we must become keen observers of the global geopolitical events in order to build an analysis of the potential risks our great nation may face in the future. This duty should not be relegated to government alone; rather it must be a collective effort, as was the case with the 1st and 2nd Chimuremga respectively. We must appreciate that economic warfare as presented in the form of sanctions bears consequences far more calamitous than an atomic boom. Stanley Heller, the chairperson of the Middle East Crisis Committee put it more bluntly, “The Bush-Clinton sanctions on Iraq have killed over 500,000 Iraqi children with thousands more being added monthly. As a crime against humanity, the scale of death, misery and environmental destruction visited on Iraq this past decade now rivals what the United States did to Vietnam from 1962-1975”.
Fellow Zimbabweans, we cannot continue to be preoccupied by internal petty politics. If ever there was a time for a great awakening, it is now. In the words of Sun Tzu, “If you know the enemy and know yourself, you need not fear the result of a hundred battles. If you know yourself but not the enemy, for every victory gained you will also suffer a defeat. If you know neither the enemy nor yourself, you will succumb in every battle.”
Farai Muvuti is a Human Science Student at the University of Hertfordshire and a member of the Zanu PF Youth League.