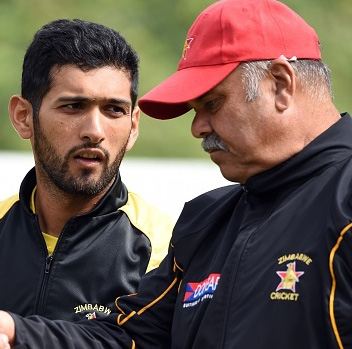 DAV Whatmore knows a thing or two about coaching struggling sides, and coaxing success out of whatever resources are at hand.
He masterminded Sri Lanka’s World Cup win in 1996, and sparked a change in Bangladesh’s trajectory when he took over the coaching role there in 2003.
He moved into his current position with Zimbabwe less than six weeks before the World Cup earlier this year, and was able to bring enjoyment and cohesion back into the team environment in remarkably quick time.
Yet positive results haven’t been forthcoming, and on Tuesday Zimbabwe slipped to a 3-0 series defeat to India despite putting themselves into positions of dominance in all three matches.
“That was a hugely disappointing effort in that first game. We honestly thought we should have won that. When you get so close, and you don’t, I think psychologically it becomes a little bit greater when you play the next one.
“We’ve got the potential, as you can see, we just need to transform our ability into performance, and that comes from here,” Whatmore said, pointing at his head.
Though Whatmore prompted “a total 180 in the players’ mindsets” very quickly, according to former captain Brendan Taylor, he insists there is no quick fix for Zimbabwe’s issues.
“It doesn’t happen like that,” Whatmore says, clicking his fingers to emphasise the point.
“It never does. It takes a bit of time. If you look at the history of Zimbabwe cricket over the last four years, if you’ve done your research you’ll know that we’ve only played a handful of games.
“And to improve you need to go through certain situations more often. So hopefully boys will learn as quickly as possible, because we are now playing competition which we haven’t had in the past.
“It’s okay to say ‘be patient with us’, it’s a cliche but I’m very pleased to have played these three games and we look forward very much to the future matches coming in this calendar year.
“And we look to improve. So please bear with us, we are trying really hard to get it right and we will need a bit more time. As other sides do.”