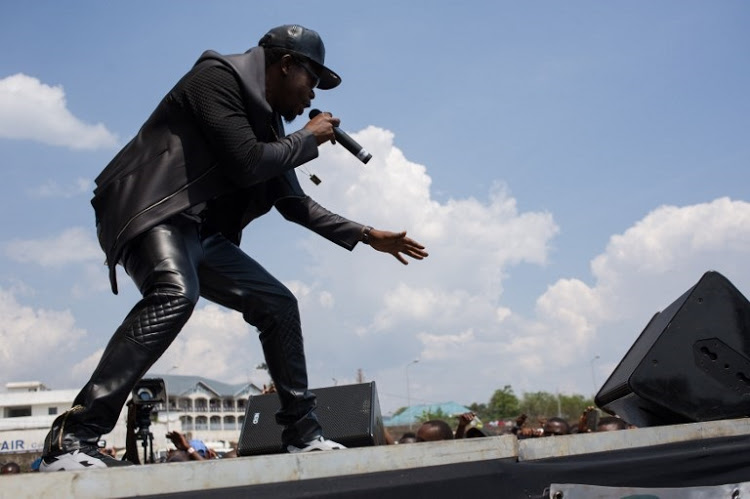 It is a conflict at once cultural, generational and political: rap music in DR Congo is staging a frontal assault on rumba, accusing its ageing stars of only singing of love and other banalities.

DRC’s growing army of rappers say their urban lyrics reflect a gritty realism edged with angst as one of Africa’s biggest and most unstable nations heads towards a troubled presidential election.

At the back of a courtyard in Bandal, a popular and trendy district of the capital Kinshasa, a DJ called DDT has opened Kinshasound, a recording studio which is about the size of a toilet.

At the mixing deck, beat maker Kratos is playing around with a mix of ethnic rhythms caught somewhere between the big sounds of the Bronx and the driving drumbeats of Afrobeat or Afro-Trap.

This tiny studio has attracted rap artists like Sista Becky, Alesh and Magneto, who electrified the crowds at last month’s Red One urban music festival in Kinshasa.

A video-clip involving an actor covered in condoms for Belgium singer and artist Baloji, who is part of a wave of Congolese rap

But Kinshasound has also attracted other visitors — among them officials responsible for music and events at the national censorship board who shut it down in August, DDT explains.

It was eventually reopened after a series of negotiations, which involved handing over some cash.

And their complaint? That DDT was producing “obscene songs which were an offence to common decency” and violated a law on censorship dating back to 1996.

‘The boss got no heart’

“I asked them which (lyrics were problematic) and they didn’t know what to tell me,” DDT said — although he himself has a pretty good idea.

DRC’s growing army of rappers say their urban lyrics reflect a gritty realism edged with angst as one of Africa’s biggest and most unstable nations heads towards a troubled presidential election
“We are basically putting out a lot of popular songs,” he says, referring to one track released late last year by Alesh called “Mokonzi o’a Motema Mabe” — which means “The boss got no heart” with a chorus that includes the phrase: “Stealing is not good”.

The track came out as the Democratic Republic of Congo was in the grip of a political crisis over the contentious rule of President Joseph Kabila. He refused to step down at the end of his mandate and repeatedly delayed the elections — although a date has now been set for a vote on December 23.

For the censors, the track went too far and they banned it, although only for a time.

“The old rumba stars sing about love most of the time, but for us, it’s mostly about social matters, like needy youngsters in the street, the lack of electricity, about illness, about the current political system, about things that aren’t working.”

Rap’s subversive rise has shaken things up for the rumba scene, which has long been regarded as DR Congo’s national music

Rap’s subversive rise has shaken things up for the rumba scene, which has long been regarded as DR Congo’s national music and which has had ties to the ruling classes since the country won independence from Belgium in 1960.

One of its most celebrated hits, “Independance Cha Cha”, which was written by singer Le Grande Kalle to celebrate the nation’s newly-acquired freedom, remains widely recognised as one of the best-known examples of Congolese rumba.

Widely respected for the genius of Grande Kalle and his L’African Jazz band and fellow founding fathers Tabu Ley Rochereau and TPOK Jazz as well as extraordinary vocals of the late Papa Wemba, rumba underwent something of a revival after the millennium.

During that decade, several beer companies sponsored stars like Werrason and JB MPiana, and the genre continued its commercial trend with “libanga” — in which the artist drops the name of an influential sponsor into a song in the hope of earning a fistful of dollars.

An emblematic figure within Congolese hip-hop, he has made a name for himself with music that “makes your brain dance.”

‘We have the power’

Like Smockey, a hip-hop artist and political activist in Burkina Faso or Uganda’s singer-turned-politician Bobbi Wine, Lexxus Legal has long been engaged in political activism, and is running as an independent candidate in December’s legislative elections.

AFP / JOHN WESSELSRappers in DR Congo are staging a frontal assault on rumba, accusing its ageing stars of only singing of love and other banalities

“When President Kabila addresses the nation, the word ‘culture’ has never passed his lips, not even once,” he rails.

“We no longer have the right to switch off. The words should be about us, we’ve got the power!”

But in the world of music, like in politics, the boundaries are sometimes blurred.

These days, rap’s “rebels” are more likely to come from the nicer neighbourhoods of Kinshasa like Gombe or MaCampagne than from the slums of Masina or Selembao. And some of them even have a job.

On the other hand, the country’s most established rumba artist, Koffi Olomide, 63, recently took everyone by surprise by getting political. He lashed out at the voting machines which have sparked widespread controversy in the run-up to the election.

Lauded by the government, the machines have been rejected by the opposition as open to abuse and fraud.