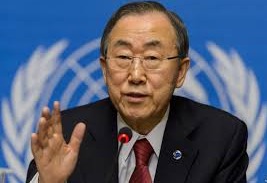 AFRICAN governments and civil society should have both institutional and substantive expectations of the next UN Secretary General.
The institutional expectations should focus on feasible reform of the United Nations itself. This would mean African governments de-emphasising the demand for improved representation on the Security Council and reforms in voting procedures. The complex politics surrounding these two issues make change unlikely during the five-year term of the next secretary general.
Instead, Africa should prioritise the need for the UN itself to become more accountable.
The world body promotes the sensible idea that good governance requires those who exercise public authority to be held accountable. Unfortunately, the UN does not practice what it preaches. In fact, it exercises significant power over the lives of many Africans without being accountable for its actions.
For example, when officials who run UN refugee camps behave abusively there is no forum through which victims can seek relief. In fact, the world body has been reluctant to take responsibility for sexual offences committed by its peacekeepers.
Similarly, to date, the UN has not accepted responsibility for nor provided a means through which it can be held accountable by those it harmed by bringing cholera to Haiti. The same applies to its failure to protect refugees in Kosovo from lead poisoning.
Relying on organisational immunity
The worst case would be a new secretary general who does not prioritise this institutional reform. This would mean a new UN boss who thinks it can continue relying on its organisational immunity; to avoid being accountable to those it harms through its negligence or misconduct.
The best case scenario would be a secretary general who establishes an independent mechanism to hold the UN accountable when its actions cause unnecessary harm. This will ensure that there is an effective means to hold the world body accountable. This mechanism, where appropriate, should also offer a remedy for its victims.
Africa should encourage the next UN chief to create a formal, independent accountability mechanism. Africans may then be able to obtain an effective remedy.
Africa’s substantive concerns
Africa’s substantive concerns relate to peace and security and development. The continent should expect the next secretary general to enhance coordination between the UN and African regional organisations. These include the African Union, whose mandate includes promoting peace and security and sustainable development. It also promotes international cooperation within the framework of the UN Charter and the Universal Declaration of Human Rights.Advertisement

The next secretary general should ensure that the different UN specialised agencies and programmes work effectively and efficiently with African stakeholders. Given the UN’s limited resources, the secretary general should prioritise those issues that affect Africa but are global in scope and ramifications. The most pressing are Africa’s migration and refugee problems. They apply both within and outside the continent.
The other substantive priority is the promotion of the Sustainable Development Goals (SDGs). These are connected to both Africa’s migration and refugee challenges and to global security. Africans risk their lives fleeing persecution, violence and poverty. They will only remain at home when they feel their countries can offer them the possibility of a life with dignity and opportunity.
Creating these conditions will require the successful candidate to work with African governments, civil society and other stakeholders. They include donors, international and regional organisations and international NGOs. The SDGs provide a useful road map for guiding the actions of all these parties.
For the benefit of Africans
The secretary general can play a critical role in encouraging and coordinating the all these parties’ actions to benefit Africa’s citizens. This would also benefit the countries to which Africans tend to migrate, both on the continent and elsewhere.
The worst case scenario is for the next secretary general to be overly sensitive to the political concerns of the largest and most powerful UN members. Such a person is likely to prioritise the concerns of other regions to the detriment of Africa.
Africa’s best hope for the new secretary general is someone who ensures that Africa’s concerns and needs remain high on the global agenda. This will help ensure that the UN’s African programmes have enough money and personnel. It will also make it an effective contributor to peace, security and the implementation of the SDGs in Africa.
Danny Bradlow, SARCHI Professor of International Development Law and African Economic Relations, University of Pretoria.