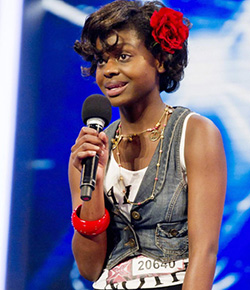 UK: THE Xtra Factor Live has launched a campaign to find former X Factor contestant Gamu Nhengu.
Gamu appeared on the singing contest back in 2010 but lost her place to Katie Waissel– which many consider to be one of the biggest injustices of the show ever.
Now Rylan Clark-Neal and his co-host Matt Edmondson are determined to find her with the help of the public during a segment on their show called Find Gamu.
On Sunday evening they upped their campaign as they roped in Strictly winner and The Wanted singer Jay McGuinness who appealed to the public to come forward.
In a clip on the show, in the style of a charity campaign, he said: “Please do whatever possible to help find Gamu.
“Spare any time you can to support our search. Gamu is out there somewhere. Together we can find her.”
The Xtra Factor campaign has received a mixed reaction from fans – and has also created some very funny responses.
One person tweeted: “I’m pretty sure she works in Greggs the Bakers! #XtraFactor #FindGamu.”
Others – who have did not watch the show back in 2010 – are very confused, with one asking: “Who or what even is Gamu? #XtraFactor #FindGamu.”
While someone else joked: “#XtraFactorLive why are none of you asking @CherylOfficial where gamu is?  After all she sent her packing 6 years ago! ???????? #FindGamu.”

After Gamu – who was 18 at the time –  wasn’t picked to go through to the live shows over 250,000 people signed a petition to get her reinstated.
Not long after that she faced a public battle to stay in the country as she risked being deported back to Zimbabwe.
She later played down her visa issues, saying: “The truth was that I, as an immigrant, needed to renew my visa every three years.
“It so happened, in the middle of The X Factor, that the visa needed renewal and it was claimed that I was going to be sent back. But I don’t think there was ever a danger of that.
“When the Home Office read about it all, they investigated and we went to court. We were there 10 minutes.”Advertisement

The aspiring singer also admitted she wasn’t a fan of the drama that came with the show.
She recalled: “When I left and the show was aired, hundreds of people were camped outside my door and sleeping in cars outside the driveway.
“I was inundated with contracts and people wanting interviews. There were boxes arriving and people calling. It was mind-boggling.
“I was 18 and the show hadn’t worked out. I didn’t know what to do.”
Three years later the singer, who lives in Tillicoultry, Clackmannanshire, released an album that failed to make much of an impact.
It has been three years since she has hit headlines.