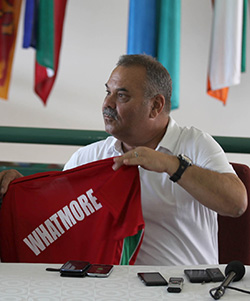 DAV Whatmore was on Tuesday morning unveiled as Zimbabwe national cricket team coach for the 2015 International Cricket Council World Cup, but could be here for a longer period if the team reaches the Super Eight.
Whatmore replaces Stephen Mangongo who was fired last week after Zimbabwe lost all three Tests and five One Day Internationals against Bangladesh.
Mangongo was tipped for the Under 19 [post, but has been further dropped to develop juniors below that age group. Effectively, ZC fell just short of saying Mangongo was no longer needed in Zimbabwe cricket.
The 60-year old Whatmore will be assisted by Douglas Hondo, the bowling coach while a batting coach is also being sought.
Mufaro Chiturumani was in pole for batting coach but has fallen by the wayside with Whatmore set to make the final decision, although Murray Godwin seems favourite for the post.
Wilson Manase, the Zimbabwe Cricket chairman said they were looking forward to working with the former Pakistan and Sri Lanka boss for a longer period.
“Dave is assisting us up to the World Cup, but we are looking forward to work with him long term. Dave’s vast network will add value to us,” Manase.
“My goal is to build the game and I will achieve it,” he added.