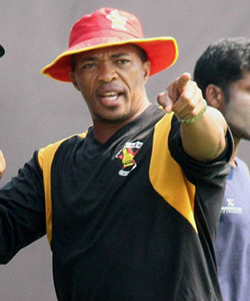 MAKHAYA Ntini, Zimbabwe’s former interim coach, has slammed the tactics of Dav Whatmore, who was sacked as the team’s head coach in May this year, and labelled then captain Hamilton Masakadza “a weak leader”.
Ntini was installed as Whatmore’s successor, albeit on a temporary basis, while Masakadza was relieved of his duties as captain and was replaced by Graeme Cremer ahead of the series against New Zealand at home in July-August.
Ntini, who was working as assistant coach under Whatmore, delivered a brutal assessment of the team’s technical aptitude, or the lack of it, in the aftermath of the 2016 World Twenty20, saying that Zimbabwe’s players were “selfish” individuals who “didn’t play the game hard enough”.
Ntini made the remarks in his post-tournament report, which was picked up by Zimbabwe Cricket’s technical committee in its report to the board recently.
Ntini is quoted in the report as saying that the “head coach and captain should demand results”, and appeared hugely unimpressed by several aspects of Whatmore’s tactics as well as the attitude and work ethics of certain players.
“He [Ntini] disagreed with team tactics, particularly the tactic of the opening batters going at the same pace,” read the technical committee’s reporT.
“He thought that one batter should go for it while one stuck around and batted deep. He also thought that the senior players should take charge of the match.”
The report also revealed how Ntini was not happy with the bowlers for “not following instructions”, and how he preferred Tinashe Panyangara to be appointed Zimbabwe’s captain in the event that Masakadza was removed.

“He was happy with Panyangara, who he felt was a workhorse, and (Donald) Tiripano,” the report said.
“Although the bowlers were improving, they were not following instructions. This was more apparent during the Afghanistan match (warm-up game before main competition). He felt that the captain should be a stronger person who can ensure that the bowlers follow instructions.Advertisement

“He suggested that Tinashe Panyangara should be captain. He also suggested that there should be different captains for different formats. He felt Hamilton was uncommunicative and needed to speak more during team meetings.”
While on the subject of pace bowlers, the widely acknowledged view that Zimbabwe’s quicks aren’t hostile enough was also brought up by Ntini in the report: “Makhaya pointed out that there was need to find a genuine fast bowler as at the moment all the bowlers were bowling at around the same speed. They are basically line and length bowlers.”
Additionally, Ntini noted, while Zimbabwe’s bowlers lacked the firepower to trouble batsmen at the highest level, the overall attitude was a big concern. Ntini argued that the team needed to toughen up in a huge way, and shun the tendency of bothering only for one’s place in the side.
“He felt that Zimbabwean players didn’t play the game hard enough. Selfishness is a problem; players are worried about their own averages. The head coach and the captain should demand results.”
Ntini, South Africa’s first ethnic black international cricketer, also lamented Zimbabwe’s selection process, particularly at the World T20 where he wanted Tendai Chatara, the injured seamer, to be flown back before the tournament.
“Makhaya questioned the selection process and he felt that it was wrong to select Chatara, who was not fully fit and was struggling with his leg. He thought that at most Chatara was 60 percent fit. He had wanted to send Chatara back home after the practice matches in the UAE but had to keep him due to the injuries to (Graeme) Cremer, (Neville) Madziva and (Luke) Jongwe.”
Another area of concern for Ntini was Elton Chigumbura, who he felt should bat higher up the order since he rarely bowled any more.
This article is taken from Wisden India.