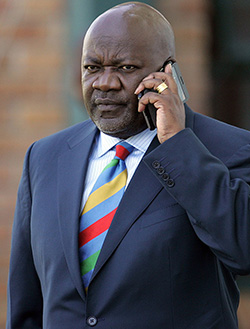 DAV Whatmore has signed a four-year contract to coach the national cricket team, the Zimbabwe Cricket board confirmed on Thursday.
“We signed a contract yesterday (Wednesday) which is going to be a four-year deal,” Zimbabwe Cricket chairman Wilson Manase said at a press conference in Harare.
Whatmore was unveiled as coach in December on a short-term deal till the end of the ICC World Cup in Australia and New Zealand.
Manase praised the performance of the team at the World Cup where they won one of their six matches but were competitive against the top-ranked nations.
Former Australia international Whatmore, who coached the country of his birth Sri Lanka to the World Cup title in 1996, is in charge of his fourth national side having also led Bangladesh and Pakistan.
His next task will be to take Zimbabwe on a limited overs tour of Pakistan next month.
Zimbabwe will become the first test-playing nation to tour Pakistan since the 2009 attack by gunmen on the visiting Sri Lankan cricketers. Zimbabwe will also host India and New Zealand later this year.
Whatmore’s first task after signing the new deal is to take Zimbabwe to Pakistan next month for two T20s and three One Day Internationals.
The itinerary has been confirmed after the Pakistan Cricket Board (PCB) agreed to foot Zimbabwe’s expenses for the tour.
The visit will cost Pakistan $500,000. This includes player allowances, air tickets, accommodation and life insurance as per demands of ZC which is reportedly sitting on a $20 million debt and was unable to fund the tour on its own.
Pakistan would in turn also tour Zimbabwe in August as part of the agreement.
“I am grateful to my counterpart in ZC, Wilson Manase, for acceding to our request of sending a full side on a tour to Pakistan,” PCB chairman Shaharyar Khan said in a statement on Thursday.
“This would be an auspicious moment for Pakistan cricket and I am positive that it would open doors of international cricket in Pakistan.
“I am indeed confident that Zimbabwe’s incident-free tour shall be the harbinger of more and more associate and full member nations visiting us in the months and years to come,” he added.
Pakistan Itinerary:
May 22: First Twenty20 international
May 24: Second Twenty20 international
May 26: First one-day
May 29: Second one-day
May 31: Third one-dayAdvertisement