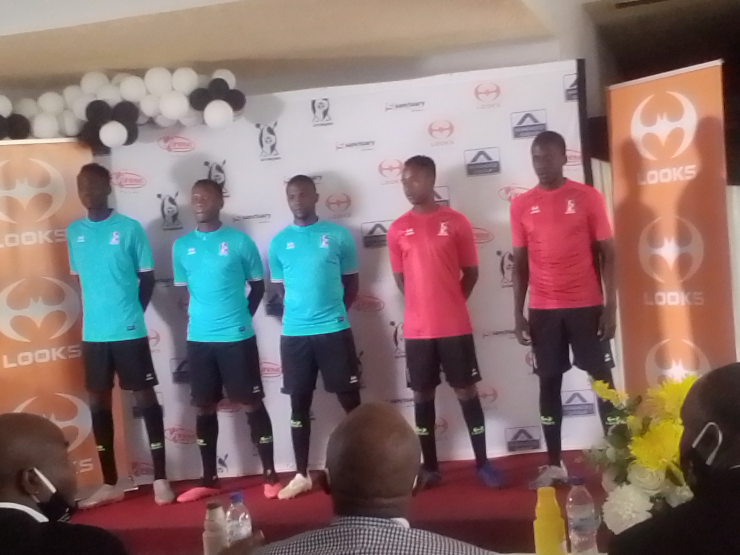 The new training kit which was unveiled last Friday at the official launch of Bosso’s new kit sponsor has been met with mixed feelings with most of ardent supporters distancing themselves from the news colours.

Bosso announced a three-year partnership with a new technical sponsor, On the Ball (OTB) Look Sportswear worth US$300 000.

Among the peppermint training jerseys, they are also some with neon, orange and red colours.

The Bulawayo giants also got four sets of playing kits, which include short and long-sleeved traditional zebra-striped shirt, which they can alternate with black or white shorts, as well as an all-black and all-white playing kit.

However, the peppermint green kit did not go down well with most of the club’s die-hard fans who are convinced the jerseys are blue in colour, a shade that is a traditional to Bosso’s bitter long-time rivals, Dynamos.

What catches the eye is that the fans are missing the point that green is also the traditional colour of Caps United, another Bosso’s great rival.

However, other ardent Highlanders FC supporters also called for calm and urged fellow colleagues to take note of what is happening in other countries where football is developing immensely.

Maphisa-based Highlanders follower, Mbongeni Sibindi told NewZimbabwe.com; “There is need for people to shy away from that theory of saying a particular team must wear such a colour. Remember we are not living in the 90s.”

“Take a good example at the away kits of the likes of European teams like Juventus and Barcelona. That peppermint kit is a very nice kit.

“Let us keep our traditional black and white stripes for home games then we also have different colours besides white for away games,” said Sibindi.

Meliwethu Ncube said his Bosso fans must be grateful as the team did not even have training kits before the coming in of the sponsors.

Mchasisi Ndlovu said it was time Zimbabwean teams to copy from other countries where colours are not that much of a big deal.

“Look at England, Manchester United and Liverpool are long-time rivals but they still share the same traditional colour red, to the extent that some season they even share the same colour of away kits.

“In South Africa, people refer to Orlando Pirates as “Ezimnyama Ngenkani”, only a few knew that their traditional colour is red,” he said

Zimbabwean fans are very particular about team colours in such a way that one can be severely beaten for wearing a blue shirt sitting at the famous Soweto End at Barbourfields stadium in Bulawayo.

NewZimbabwe.com came across some comments posted by fans after the peppermint kit had been unveiled.

“Highlanders FC on one of its training & warm up kits & Dynamos FC on one of its kits….Asazi Madoda kodwa my personal view is we should never have come close to Dynamos colours…#SIYINQABA,” posted die hard Bosso supporter, Nodumo Nyathi on Facebook.

Mbambo UNyokana KaMpenyane said; “Sometimes young Bosso supporters need to understand that Amahlolanyama transcends football. The club is a symbol of our culture and traditions. We will never be political correct when it comes to that. Highlanders should never, ever wear anything close to blue. Not even in training. We will raise this issue Ku General meeting,” he said.

“Even in 2020 we are still Highlanders FC and our biggest rivals is still Dembare. Anything that seems to be blue it’s a no for me. Boycotting is also a no for me,” insisted Nhlonipho Mqondisi Ncube.