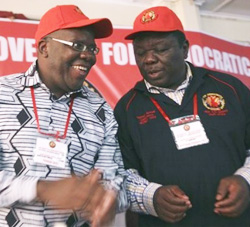 THE MDC-T’s viability as a strong opposition party has been called into question after its crushing election defeat on July 31. Many Zimbabweans are waking up from the dream that change will come through the MDC-T.
Unfamiliar calls for the leader to quit have started echoing down the corridors of the people’s alternative movement. The coming months will provide a tough test to prove if the movement is not the biblical house built on sand, without any foundation.
Supporters of current leader Morgan Tsvangirai accuse those agitating for new leadership of either greed and selfish ambition or being sponsored Zanu PF agents. But even they cannot deny that the survival of the party is under unprecedented threat.
Many will find my prescription, which I present here, unpalatable. I have written in the past advocating for exactly the opposite of the solution I intend to advance here.
The MDC-T, at the current stage, can either be saved by a radical leadership renewal or, if that fails, by a split. Yes, a split. Otherwise it will choke to death, slowly.
Volumes upon volumes have been written about the power of unity. But unity for the sake of unity is meaningless if the desired result is not achieved.  The MDC-T is not being held together by true unity but by the fear of a rebellion failing. Sustainable unity is when the party is held together by purpose and principle.
The unenviable situation that the MDC-T finds itself in requires much more than conventional methods. It is a foundational fault. It calls for great strategists who think both within and outside of the box. The current fabric that holds the MDC-T together is a fear of internal change. The preservation of the status-quo becomes the default outcome.
The MDC-T failed to change its image over the years. This has seen Zanu PF tearing them apart at every opportunity by creating a puppetry stigma for the party, resulting in the party failing to gather the much needed respect among African leaders. That to me has proved to be the most potent weapon that threatens the MDC-T.
The question then becomes: How does a party that has failed to wrest power for such a long time think it will change its fortunes by maintaining the status quo?
Roy Bennet, Eddie Cross, Iain Kay and Ben Freeth and many others who have decided to remain hidden, have called for a leadership renewal. In their opinion, they think the problem is Tsvangirai as a person and once he goes all their problems on earth vanish with him. This thinking, to me, is flawed. While the president has huge influence on decisions, it is the whole executive team that makes decisions of policy.Advertisement

The MDC-T has a foundational problem. It will not be solved by the elevation of Tendai Biti or any other to leadership. The call for Tsvangirai to step down, coming directly from the white members who were, I think, directly affected by the land reform, has raised questions. The reasons they advance may be genuine but their real intentions will always be suspicious.
What is required is a complete change in the thinking of the party. The whole executive council must be dismantled and another reconstituted. Laying a solid foundation is required. That is only how a new course can be charted.
The question then is: How can the NEC be dismantled completely? It is probably through a split. Only a radical split will bring the necessary change in thinking that will, in the long term, position the MDC-T as serious contenders in the race to rule this country.
Overall reconfiguration of the party is what is needed. When the party was formed, it didn’t have the experience and wisdom of a mature party and so only relied on the disenchantment of voters with Zanu PF to propel it into power. An NEC that has slept all the 13 or so years waiting for Zanu PF to disintegrate on its own without their direct input has shown that it cannot be rehabilitated.
The idea that Zanu PF was going to self-destruct or negotiate itself out of power has since been proved to be an inane strategy. As soon as Zanu PF abandoned their violence that had characterised the previous elections, we saw African countries not only embracing but defending them.
The 2005 split in the MDC was a frivolous split. It was not motivated by a need to change anything except the leader. That is why it failed and ushered with it many into political wilderness. A meaningful split is one motivated by purpose. That is why the Zanu split which gave birth to the current Zanu PF succeeded. It was a purpose-driven split because the leaders then saw that the late Ndabaningi Sithole was beginning to compromise on purpose. Careful thought needs to be done.
The current sickly condition of the MDC-T before and after the elections has strengthened the current maneuvers within the National Constitutional Assembly (NCA) to transform into a political party. An opportunity exists for a visionary party to enter the stage and give our people real hope. But, for the NCA, I think the platform is not ideal because the NCA is not at its strongest at the moment. You cannot launch a thriving party from a dead platform which has shown that it has no people on its side.
With due respect to Lovemore Madhuku, one of the academics I respect very much, his intended outfit may not survive. I think the mistake lies in his chosen launch pad. Prospects would have been much positive if Madhuku had remained in MDC-T and strategised from there because the MDC-T, weak as it is, has structures which if properly leveraged could yield results.
To his credit, Madhuku seems clear on what needs to be done. The complexion of opposition politics needs to reject the puppetry tag and espouse a Pan-African agenda. This has been the mistake of the MDC-T.
Leadership renewal will achieve minimal positive change if some of the key decision makers are retained in decision making. But I think there are intelligent and energetic people within the current leadership of the MDC who can drive real change which is based not only on application of cosmetics but real policy, values and strategies. These are people that have all these years been frustrated by the policies of the party and yet have the prescription required to dislodge Zanu PF.
This represents the future for the MDC-T. The maintenance of the current leadership by Tsvangirai will not only show a lack of leadership but will be the ultimate death of the party. History in Zimbabwe is fraught with evidence that any party that fails to gain ground over the first or second elections and fails to transform will be thrown into oblivion.
The splinter party can then successfully address the current weakness and redefine their stance around Pan-Africanism. A new form of radicalism, which exceeds that of Zanu PF, will then be required that acknowledges the gains achieved by Zanu PF but then seeks to correct the mistakes Zanu PF made which resulted in corruption and much fewer people benefitting from otherwise good intentions.
The leader could then address the following, together with the positive policies already espoused by the MDC:

# Sovereignty, territorial integrity and national interest – reassure the nation regarding these important pillars
This is not what Roy Bennett and others have in mind. Their intended change of just individuals, while it may appear easier, will not yield results.
The options available to those who love the MDC-T are not easy. Leave things as they are and die a sure slow death. Or, follow the Bennett approach which addresses symptoms for a while. Or, take a risk with the prospects of re-kindling the dying flame and offer hope to the people in Zimbabwe who had hoped for a future with the party.
With correct timing, what may appear a reversal of gains may be the only prescription required to save the party whose fortunes are clearly fading.
Mbango Sithole writes from South Africa. He can be contacted on e-mail: sithole70@yahoo.com