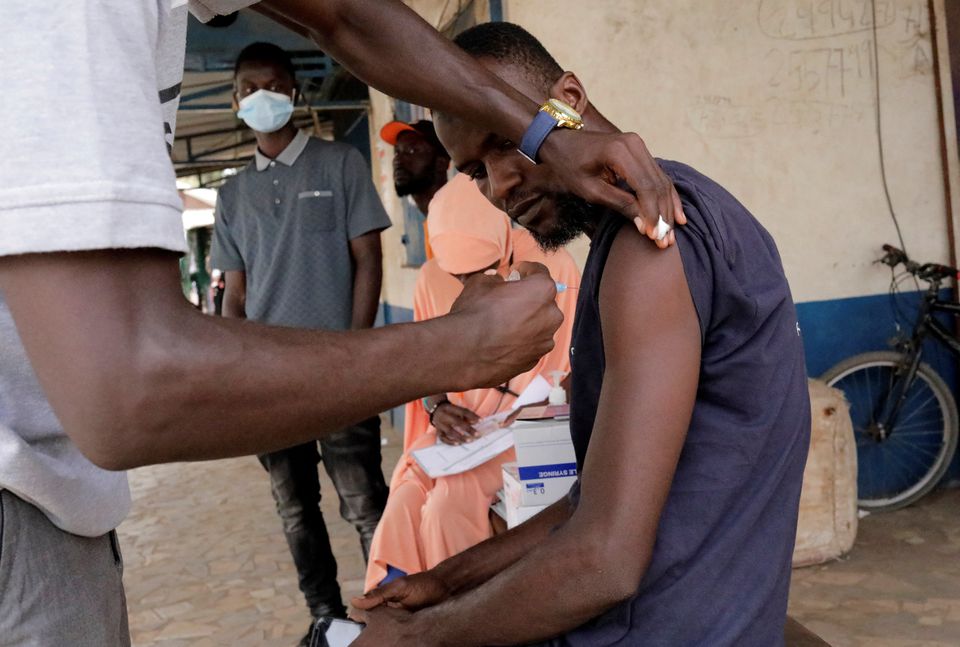 DAKAR/ACCRA, May 18 (Reuters) – It’s noisy inside the Mamprobi clinic in Accra as kids clamber over their mothers while they wait to get their measles vaccines. Outside, an area reserved for COVID-19 shots is empty. A health worker leans back in his chair and scrolls on a tablet.

One woman, waiting to get her daughter inoculated, is fully aware of the dangers of measles: the high fever, the rash, the risk to eyesight. But COVID-19? She has never heard of a single case.

The perception that COVID-19 doesn’t pose a significant threat is common in Ghana’s capital and elsewhere in Africa, whose youthful populace has suffered a fraction of the casualties that have driven vaccine uptake in places like Europe and America, where the disease tore through elderly populations.

“I mean, Ghana has been spared up until now doing just what we’re doing,” said Nana Kwaku Addo, a 28-year-old construction worker in Accra. “I’ve heard people say it’s common sense (to get vaccinated), but what about all the other countries that have taken it and still put people in lockdown.”

Only 17% of Africa’s 1.3 billion population is fully vaccinated against COVID-19 – versus above 70% in some countries – in part because richer nations hoarded supply last year, when global demand was greatest, to the chagrin of African nations desperate for international supplies.

Now though, as doses finally arrive in force in the continent, inoculation rates are falling. The number of shots administered dropped 35% in March, World Health Organization data shows, erasing a 23% rise seen in February. People are less afraid now. Misinformation about vaccines has festered.

“If we had gotten vaccines earlier, this kind of thing wouldn’t happen so often,” Christina Odei, the COVID-19 team leader at the Mamprobi clinic, said of the low uptake in Accra. “Initially everyone really wanted it, but we didn’t have the vaccines.”

That worries public health specialists who say that leaving such a large population unvaccinated increases the risk of new variants emerging on the continent before spreading to regions such as Europe just as governments there abandon mask mandates and travel restrictions.

In a sign of possible perils to come, cases of two Omicron subvariants have shot up in recent weeks in South Africa, the continent’s worst-hit nation, prompting officials there to warn of a fifth wave of infections.

To boost uptake, countries are focusing on mobile vaccination drives, in which teams visit communities and offer doses onsite.

However many African countries can’t afford the vehicles, fuel, cool boxes and salaries needed for a national campaign, according to more than a dozen health officials, workers and experts across several countries. Meanwhile, donor funding has been slow to arrive, they said.

Rahab Mwaniki, the Africa co-ordinator for the People’s Vaccine Alliance advocacy group, said it was a “big ask” for Africans to prioritise getting COVID-19 vaccines to help protect others around the world when infection rates at home were low.

“Many people say, ‘you didn’t help us’. They feel like the West never really supported them,” she added, stressing that Africans should still get vaccinated to protect themselves and others from new variants.

West Africa is facing its worst food crisis on record driven by conflict, drought, and the impact of the war in Ukraine on food prices.

For many people COVID-19, which carries a far greater risk of severe illness and death for the elderly, is not the most pressing concern. The median age in Africa is 20, the lowest of all regions, and about half the 43 in Europe and 39 in North America, according to a Pew Research Center analysis of U.N. data.

“Let me ask you one question,” said Mawule, a businessman in Accra. “Is COVID the biggest problem in Ghana right now? You think it’s a bigger problem than inflation, the way people suffer for fuel?”

Now the continent has too many COVID-19 vaccine doses. Vaccination sites lie empty; millions of unused vials are piling up, and one of Africa’s first COVID-19 vaccine producers is still waiting for an order. read more

At the Mamprobi clinic, health workers in bright yellow vests have resorted to proactive measures.

They fan out across the busy market stalls and stores in the area, one with a cool box slung over his shoulder containing COVID-19 vaccine shots, asking wary shoppers if they would like to receive an injection.

After an hour toiling in the baking sun, the team had administered just four doses.

NO MONEY, NO JINGLES

To boost uptake, countries including Ghana, Gambia, Sierra Leone and Kenya are focusing on mobile vaccination campaigns that visit communities. But finances are stretched.

Misinformation is tough to unglue on a continent where big pharmaceutical companies have in the past run dubious clinical trials resulting in deaths. Health workers say they need funds to counter false rumours.

Ghana, one of Africa’s most developed economies and one applauded for its early inoculation surge, has a funding gap of $30 million to carry out another campaign, according to the World Bank. Irregular power supply jeopardises the vaccine cold chain. Doses expire.

“We don’t have any problem with the number of vaccines anymore. It’s only a problem with uptake and the money to get those vaccines out to people,” said Joseph Dwomor Ankrah, who manages the country’s COVID-19 vaccine distribution.

Niger, where only 6% of the population is fully vaccinated, lacks enough cold storage for vaccines in its vast rural areas, or motorbikes to distribute them, according to the World Bank.

There have been some successes; Ethiopia has vaccinated 15 million people in a nationwide push since mid-February, for example.

Yet uptake is “abysmally low” in the tiny state of Gambia, said Mustapha Bittaye, director of health services.

The African Union wants Gambia to take delivery of more than 200,000 doses, but the country is still working through an old batch and doesn’t need more, Bittaye said.

In Zambia, where coverage is 11%, officials are planning outreach campaigns but worry they won’t be able to cover the cost of feeding doctors working far from home or pay for their transport.

In Sierra Leone, where 14% of the population is fully vaccinated, radio stations sometimes refuse to broadcast the government’s pro-vaccine messages because of unpaid invoices, said Solomon Jamiru, the country’s COVID-19 spokesman

A World Bank fund for vaccine purchases and rollouts has sent $3.6 billion to sub-Saharan Africa. Of that, only $520 million has been spent. Amit Dar, the bank’s human development director for Eastern and Southern Africa, said outdated health systems had struggled to absorb the funding.

Health experts say more funding was needed at the start of the pandemic for logistics and training.

“The fact that we didn’t invest heavily a year or 18 months ago is a big part of what we are seeing now,” said Emily Janoch, a senior director at aid group Care USA. “These are the consequences of earlier failures.”